GRNews
GreekReporter.comGreeceGreek PM and Bulgarian Counterpart Believe Greece and Bulgaria Can Be Axis... 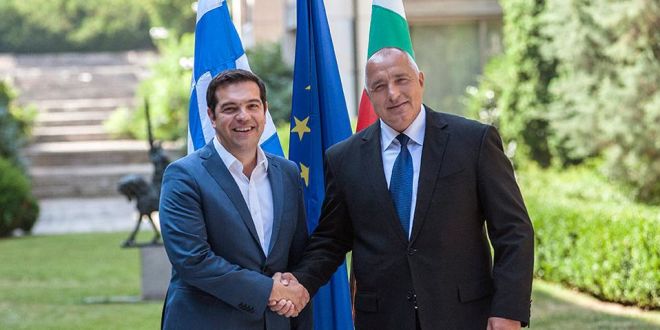 “The Greek-Bulgarian High-Level Cooperation Council held on here on Monday will allow Greece and Bulgaria, two highly important countries of the Balkan peninsula, to make a significant new start toward establishing very close and constructive relations,” Greece’s Prime Minister Alexis Tsipras said on Monday, in joint statements with his Bulgarian counterpart Boyko Borisov after the Council ended.
Tsipras and Borisov pointed to the role of the two countries as pillars of stability within the surrounding region, at a time of generalized destabilization in their neighborhood, and noted their agreement for deeper cooperation within the EU and NATO in order to strengthen this role and to ensure security, stability, peace and growth in the region.
“Looking at recent developments in our neighborhood, one sees that the need for cooperation is more urgent than ever,” the Greek prime minister commented. He noted that there were major challenges to face as three parallel crises unfolded — the economic, refugee and security in Europe crises — and noted that Greece and Bulgaria fortunately remained outside the last of these as pillars of security and stability.
“Our cooperation will help so that we stay out of this crisis,” he added. Developments in Turkey and the need to progress faster toward a “better, social and democratic Europe” demanded the closest possible cooperation between the two countries, he said.
The Greek and Bulgarian people had the wisdom to overcome any past differences and forge a relationship that was very constructive and mutually beneficial for both sides and for the region, Tsipras noted. Greece and Bulgaria could be a model for a constructive cooperative relationship to promote peace and stability in the region, between two countries in the EU and NATO, he added.
“We can do a lot together within the EU and NATO with a flexible policy benefiting both states,” Borisov said, noting that relations between the two countries and their governments were marked by “personal relations and understanding” and that both sides had supported the other in times of crisis. Even though the two governments were from different political “families,” he added, they agreed on issues of critical importance.
Tsipras gave his Bulgarian counterpart an open invitation to visit Athens, Thessaloniki and Alexandroupolis to examine the progress of their initiatives and said there would be “open communication” between them.
Following the Council meeting, the government delegations from the two sides signed a series of bilateral agreements, including a Joint Declaration of the 3rd Greek-Bulgarian High-Level Cooperation Council meeting, a Joint Declaration on energy cooperation, a Executive Program for Educational and Cultural Cooperation in 2016-2018, and a Joint Action Program for Tourism in 2016-2018.
(Source: ANA-MPA)