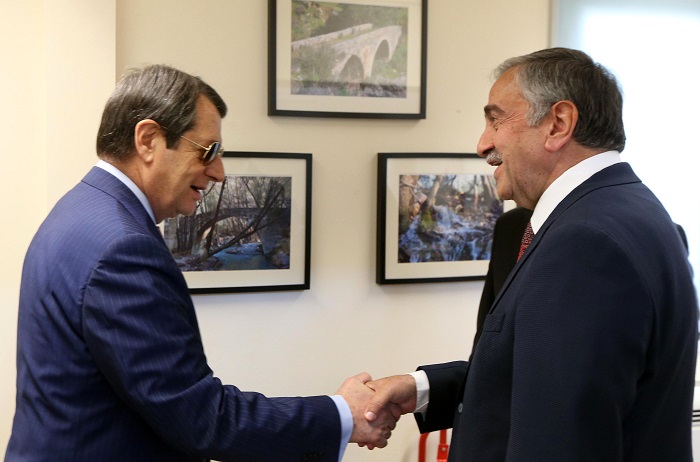 On Friday Cyprus’ President Nicos Anastasiades met with Turkish-Cypriot leader Mustafa Akinci in efforts to continue talks to resolve the Cyprus Issue, and reunify the island that has been divided since 1974 when the Turkish military illegally occupied the northern third.
According to CNA, after the meeting Anastasiades commented that the two leaders identified many differences, “but also the will to overcome them through creative dialogue.”
“Of course, this will show in the end; it was the first meeting – I wouldn’t say the first dealing with the matter because views had been exchanged at times – but the first that dealt with the matter in-depth,” Anastasiades added.
The issue that has been plaguing the divided island for the past 42 years has been the subject of a long series of UN-led talks, but until now there is no resolve or permanent solution.
Greek-Cypriots are pushing now more than ever for the removal of the 43,000 Turkish troops that occupy the northern third of the island, especially because of the government and political instability in Turkey over the past month which saw a failed military coup.
For the last 42 years there are some thousand of Greek-Cypriots that are unaccounted for as they went missing during the violent occupation, and many families are still mourning their loss.
Also a crucial topic of discussion between President Anastasiades and Turkish leader Akinci is land and villages, monuments, Greek Orthodox Churches and cultural sites that have been demolished and vandalized during the 42 years of occupation.
“We are talking about a very sensitive issue for both sides and we have said that special attention will be observed on what everyone is saying,” Anastasiades said after the meeting.
There is now a newfound optimism as the talks move forward in such a serious and profound tone, unlike never before. Anastasiades added that he felt through “creative effort to overcome problems, concerns, and potential threats,” a solution to resolving distance between the GreeK-Cypriots and Turkish-Cypriots could be drastically reduced, making a solution more probable.