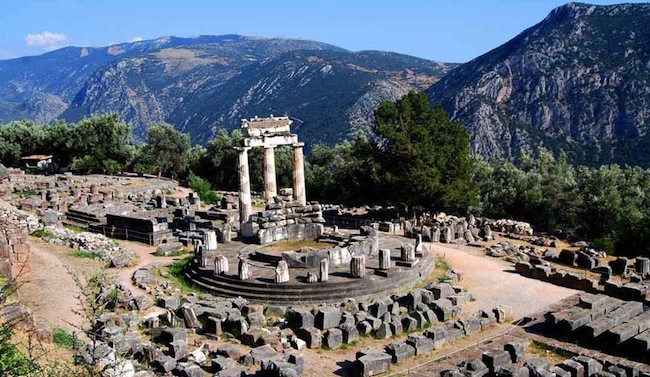 In ancient Greece the people relied heavily on oracles to predict the future, reveal secret information and answers to their deepest questions.
One of the most famous of all oracles was at Delphi, and is still there until today.
The mentally unstable Roman emperor, Nero, relentlessly tried to learn the timing and circumstances of his death from the Oracle at Delphi.
The message he received was “beware of the seventy-third year,” so the emperor continued on in a false sense of security, until shortly after this omen he was killed by Galba, who happened to be 73-years-old.
However, that’s not the only question asked of the oracle. Lead tablets reveal that Cicero asked the common Google search question: “how to become famous.”
Unfortunately, back in the days of Roman emperor Theodosius I, the oracle was shut down as it was associated with pagan cults and beliefs. However, it remains a great tourist attraction until this day, as people from all over the world travel to see the ruins of Delphi and the famous Delphic oracle.
Not much has changed in modern times from those of our ancient ancestors. Nowadays, people try to control the future, seek quick responses to their questions and expect that obtaining information on just about any subject should be instantaneous — or as simple as typing a question into Google’s search bar; a slight contrast from writing questions on lead tablets and submitting them to the Oracle of Delphi.
The modern technology that we live with today gives way to the legend of the Oracle of Delphi. It reflects the basic human need to try to control or at least anticipate the future.
Perhaps the message that the Delphic oracle revealed in ancient days to both Croesus of Lydia and Chilon of Sparta is a message that can still speak to humans today.
When they asked the oracle what was most important and the best thing to know, they both received the same answer from the oracle, saying that you must “know thyself.”
In other words, the oracle pointed people to consider what expectations and abilities they had to influence the events of the future.
Things are not always as they appear at first and people rely heavily on others to solve their problems and change their situations for them, instead of looking inwards to see how they can see the world differently and play a different role in the grand scheme of things.
It seems as though the words of the wise Oracle of Delphi are as true today as they were in ancient times.

Turkish President Recep Tayyip Erdogan referred to the Aegean Sea by the name “Sea of Islands”, as he continued his provocative rhetoric against Greece.
Cyprus

The health of Greek convicted terrorist Dimitris Koufontinas has swiftly deteriorated lately, it was made public on Saturday evening.