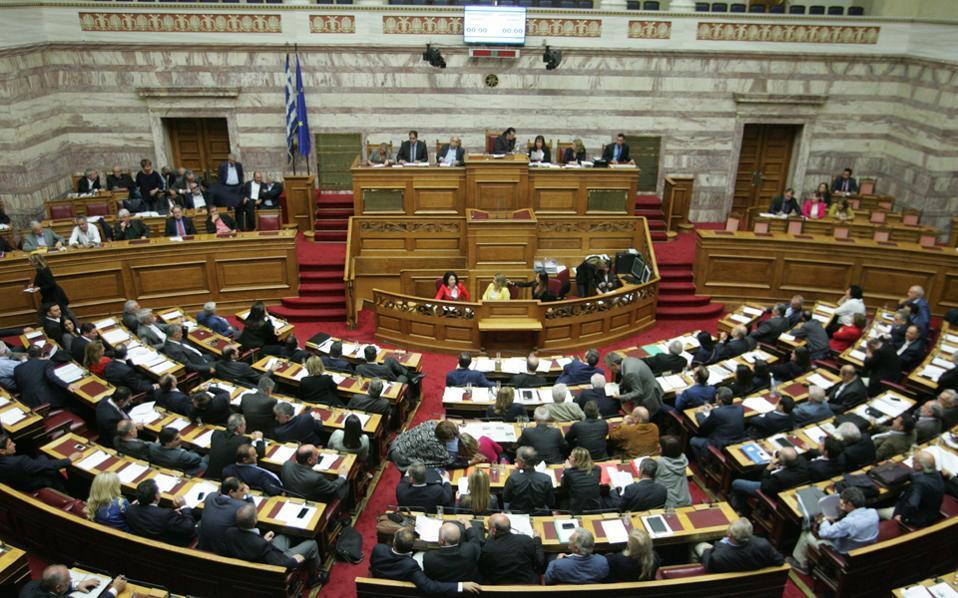 The Greek government was strategically defeated on the matter of pushing through a draft bill to introduce a proportional representative electoral system without the 50-seat bonus as it fell short of the necessary 200 parliamentary votes required to move forward at the next elections as the ruling leftist SYRIZA party had hoped for. The law was passed with 179 in favor, 83 against and 19 voting present.
With a simple majority of just 179 votes, the change will take effect two elections from now according to Greek statutes.
Greece needs coalition and not single-party governments, the head of the Centrists’ Union party Vassilis Leventis said on Thursday, addressing the Parliament plenum during the last day of a debate on amending election law toward a system closer to simple proportional representation.
The ultranationalist Golden Dawn party abstained from the vote. Far-right GD leader Nikos Mihaloliakos on Thursday said his party could not possibly support the government proposals for amending the election law before he and his party walked out of Greek Parliament. The law was passed with the support of leftist SYRIZA and its junior partner in the coalition government, Independent Greeks (ANEL). The Union of Centrists and two independent MPs also voted in favor of the law.
The conservative New Democracy party, PASOK and centrist Potami voted against the draft bill.
The Communist Party of Greece (KKE) leader Dimitris Koutsoumbas said that the government was using the draft bill to distract the public from the upcoming changes to labor laws. He said that KKE would vote in favor of articles abolishing the first-party bonus of 50 seats and giving the vote at 17 but would vote against the article that keeps the 3 percent national vote minimum needed for a party to get a seat in Parliament.
Main opposition ND Party Leader K. Mitsotakis
In his closing speech main opposition New Democracy Party leader Kyriakos Mitsotakis criticized the government’s proposals for the election law. He said that the law would lead to the inability to form a government and he accused the government of “amoralism” and petty political manoeuvring. “You are heading toward a crushing defeat in the next elections and that is why you want to deprive ND of power,” he said before the plenum on the draft election law neared its close.
Closing Speech of Prime Minister Alexis Tsipras
The reforms, part of a pre-election pledge of leftist Prime Minister Alexis Tsipras, was not passed with the sweeping majority the ruling party had hoped for. Prior to his closing speech in Greek Parliament, he posted a tweet: “A sustainable exit from the crisis will not be achieved without the democratic reform of the political system. Today, simple proportional representation becomes a law of the state.”
The Greek PM wrapped up the three-day debate before the plenu by noting that it was a significant day. He defended proposals for lowering the voting age to 17 years, noting that this would give young people an incentive to not give in to apathy but take a stand and their lives in their own hands. He defended the TV licensing law that aims to clear the television landscape.
In response to Mitsotakis, Tsipras asked him how he was so sure he would find the 200 votes needed to abolish the new election law: “Will you work with Golden Dawn?” he asked.
Addressing Greek Parliament, Tsipras responded to criticism by the opposition, including the failure of the electoral law to offer voting rights to Greeks living abroad. He asked Mitsotakis why he had never addressed this issue himself, without going into further details as to whether the issue will be addressed.
The prospect of Tsipras calling for snap elections is gaining momentum within the ruling party as a way of ending the deadlock.
The draft bill aims to revamp the electoral law by abolishing the bonus seats offered to the party that wins the most seats in the national election regardless of how thin the margin victory is. The law also lowers the voting age by a year to 17 years.