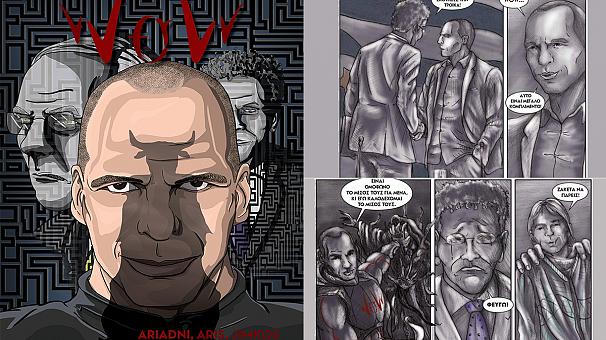 Greece’s former finance minister Yanis Varoufakis is finally available in comic form thanks to Patakis publishing house. An easy-to-understand (and humorous) guide to negotiations with Greece’s creditors are presented by the “player” with the stakes being Greece’s exit from the eurozone. The 124-page comic, titled “Wow,” in honor of the exclamation that Varoufakis had made following his first meeting with Eurogroup Chief Jeroen Dijsselbloem after the press conference where the latter had said, “You just killed the troika!”
The creator of the comic strip is Chrysa-Ariadne Kousela who has studied in Greece and Sorbonne and has worked at a number of well-known publications around the world. The comic strip is in Greek, however, it is bound to be an international collector’s item thanks to the brilliant illustrations that speak volumes.
The hero, code-named V is given supernatural powers in the comic strip.