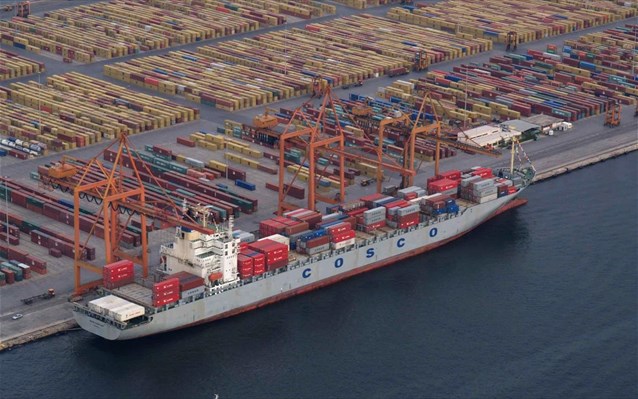 Greek parliament on Thursday ratified the sale of the majority stake of Piraeus Port to China’s COSCO, a day prior to the departure of Prime Minister Alexis Tsipras for Beijing for an official visit.
The vote in parliament came one day after it was revealed that Shipping Minister Theodoros Dritsas had tampered with the text of the deal for the renewal of the concession of the port to COSCO. A blame game ensued among government officials with no one taking responsibility for the alterations on the deal that was followed by a letter of complaint from the Chinese Embassy to Greece.
Finally, the seven controversial amendments were rectified, with Dritsas claiming the changes were made for legal purposes. After that, 223 of the 300 lawmakers voted in favor of the agreement.
The agreement was signed in April. According to the 368.5 million euro deal between COSCO and Greece’s privatization agency TAIPED, the Chinese company is to buy 51 percent of Piraeus Port Authority (OLP) for 280.5 million, with a further 16 percent for 88 million after a five year period. It is also contingent on COSCO completing investments worth 350 million euros over the next decade.
The OLP privatization has been a controversial issue, with several members of the leftist government arguing against the sale and supporting the dock workers’ unions on a continuous strike. The shipping minister in particular — who has authority over the port — has openly defied the sale agreement from day one. At the same time he has made vague statements about OLP still belonging to the state.
Opposition parties have accused Dritsas for altering the text of the agreement and bringing it to parliament. New Democracy chief Kyriakos Mitsotakis said in parliament that government members do everything they can to discredit Greece and undermine the efforts to bring investments that would stir the economy back on track.
“The government, in concern with the privatization fund, did what it ought to do and made the required improvements to be consistent with the endorsement law,” government spokesperson Olga Gerovasili stated.