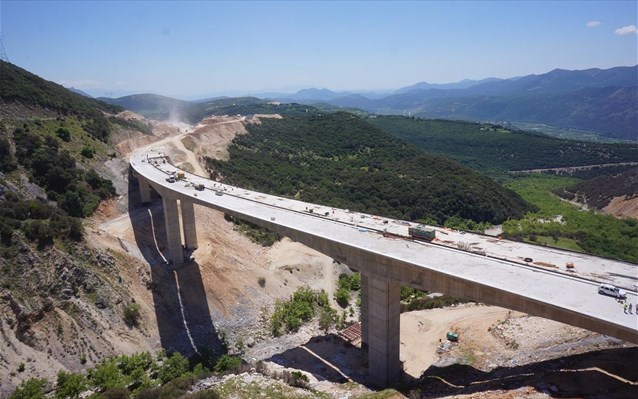 The Greek Motorway 5, still under construction, may be finished just in time for the deadline for its completion. The main section known as Ionia Odos which starts at Ioannina and follows the western coastline of mainland Greece down to the Gulf of Corinth, may be ready by March and the Klokova tunnel, which will allow the new motorway to bypass the Klokova mountain, may be finished by August 2017. Problems, however continue due to the fact that 14.5 percent of expropriations have yet to be completed.
Once the Antirrio-Ioannina line has finished, it will take an hour and 40 minutes to make the journey compared to the current 3.5 hours. There will be a 12-euro toll imposed.
The Euroionia (TERNA-TERNA) group constructing the motorway proceeded to open the first branch of the twin tunnel of Klokova whereas the second will be dug up in a few days. The tunnel will be 2,950 meters long. Construction began in May and the cost is expected to be at 100 million euros.
The project is moving at a rapid pace. By the end of the year, the General Director of the New Roadway Stelios Pentheroudakis said that two separate sections will be opened by the end of the year: from the end of the Klokova tunnel to Amphilohia (38km), as well as the section from Philippiada to Avgou (30 km).
The opening of these two parts, however, will need to include the operation of toll gates at Klokova and Angelokastrou in the southern section and Dodoni in the northern part.
It is envisioned that the completed motorway will be the second major north-south road connection in Motorway 1, making part of the trans-Balkan-Adriatic-Ionian motorway and the European routes E55 and E951.