Latest Numbers: 57,155 Identified Refugees and Migrants in Greece as of Wednesday 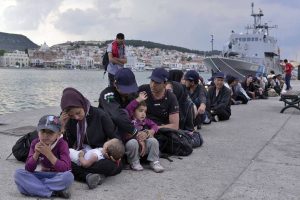 57,155 identified refugees and migrants were on Greek territory on Wednesday while no new arrivals were reported in the last 24 hours.
According to the Refugee Crisis Management Coordination Body‘s figures, 23,675 of the refugees are in northern Greece, 10,198 are hosted in the region of Attica, 8,643 on the Greek islands and 1,943 are hosted in different areas in central and southern Greece.
Refugees and migrants that are hosted in several facilities rented by the UNHCR reach 6,281 while 4,915 are staying in non-organized facilities while approximately 1,500 persons are living outside organized facilities.
Source: ANA-MPA