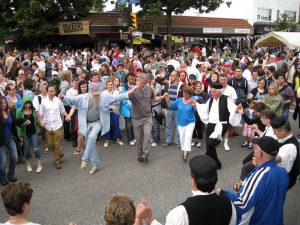 The Vancouver Greek Summerfest – an annual celebration of food, entertainment and family fun is back for the 30th year. With dozens of live singers and dancers on the performance stage and plenty of Greek food to sample, the festival is expected to be as popular as ever when it opens its doors from July 7-17.

Vancouver’s annual Greek Day, a celebration of all things Greek culture, took place on June 26 with food, drink, vendors and entertainment in the grand finale of the city’s Greek Heritage month. The award-winning festival was first established in 1974 and took place on a five block stretch on Broadway measuring almost one kilometer, from McDonald’s to Blenheim.

“Greek Day is really special because it’s part of my culture,” said Sophia Katsanikakis, whose family founded Parthenon Supermarket, a shop that stocks a number of products imported from Greece, including rare olive oils from the hi-end olives of Sitia, Crete.