PM Tsipras: 'Possible Brexit Would Cause Economic and Political Turmoil in EU' 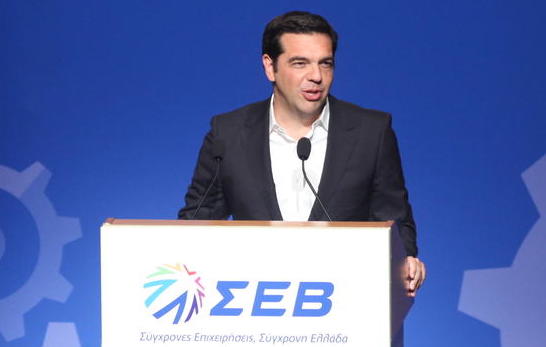 If Britain voted to leave the European Union on June 23 it would create economic and political turmoil to the EU, Greek Prime Minister Alexis Tsipras said on Tuesday during a speech at the annual general meeting of the Hellenic Federation of Enterprises (SEV).
“We all know a negative result, which all pro-European forces are hoping against, would have adverse economic effects on the entire European and world economy,” Tsipras said. “Even worse, it would cause great turmoil in the process of European integration.”
He then noted that a dialog needs to start in the EU on the causes of the economic and political crisis, the reasons for the resurgence of national strategies and isolationism, and the causes for the surge of nationalism and national conflicts.
Commenting on the upcoming negotiations on labor issues, Tsipras called on all social partners to engage “in a fruitful and constructive dialogue” for the improvement and restoring of labor relations and collective bargaining, which will lead to a new production model, which “can only be based on mutual respect of the role of productive entities.”
He said reforms are needed in the labor market that will respect the “social, psychological and creative sides of employment” and will not reduce employees to a “disposable component of the production process.”
Tsipras spoke against the extreme neoliberal approach of flexible employment, noting that reducing labor cost and deregulating the labor market is eventually unproductive. He said the EU’s values are reflected in the tradition of labor entitlements and the protection of labor rights and their defense passes through growth both for Greece and Europe. He then said Europe also needs a common European industrial policy in the spirit of the common agricultural policy, noting that CAP, despite its contradictions and distortions set about 50 years ago two objectives: the continent’s nutritional adequacy and support of the agricultural and livestock income.
(source: ana-mpa)