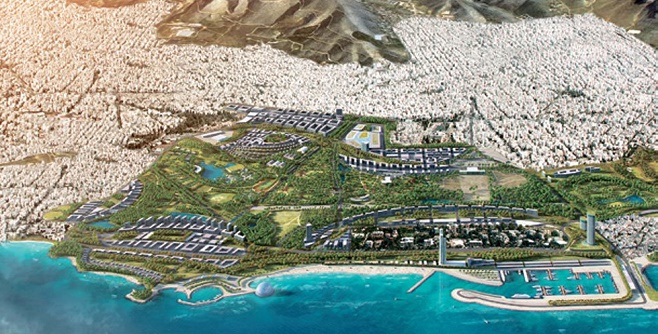 Lamda Development is ready to begin work on its landmark project at Hellenikon. “We are ready to begin the biggest project of joint reconstruction in Europe and one of the biggest worldwide. Bulldozers will be ready to begin works in the former airport of Hellinikon from the beginning of next year, in less than seven months, right after the Parliament gives the green light and the State Council approves the master plan of the project,” Odysseas Athanasiou, chief executive of Lamda Development told AMNA on Wednesday.
“In the meantime, the consortium is willing to offer any information and help, if asked, in order to get the project started the soonest possible,” Athanasiou said, adding that international and Greek companies have drafted surveys covering every aspect of the project: environmental, economic, social, etc, at a cost of more than 10 million euros. He noted that the project will begin with a liquidation of the whole area, whereas in the next six or nine months the area will be ready for reconstruction works, with the first in line creating the largest seaside park in Europe, one of the largest in the world. Athanasiou stressed that the beginning of works would signal the support of sectors heavily hit by the crisis, such as construction, cement, steel, aluminium, suppliers and transportation.
Athanasiou said that at the same time, works will begin to fully upgrade the seaside area, the marina and construction of five hotels — one seven-star hotel (the only one in Greece) resembling a boat with a capacity of 250 beds, while the other four hotels will have a capacity of at least 2,200 beds. The hotels will operate around the year, creating at least 5,500 new job positions. Lamda Development will also build a landmark building for Greece and Europe, with around 200 apartments. The project also envisaged construction of an aquarium — the biggest one in Europe.
These projects are expected to be delivered in five years, he said. Athanasiou said construction of a shopping mall will create around 4,500 new job positions, another 2,000 for the construction and operation of an international medical center and another 2,500 for the construction of an international university center.
He said that the project will have a very low average building rate, less than 0.5 with a less than 30 percent coverage. The contribution of the project will be decisive for the future of Athens and the country as it is expected to attract more than one million tourists.
Athanasiou said the biggest part of the project is expected to be completed in 12 years with the construction of 8,000 homes. He noted that the Greek state will have more than 13.5 billion euros in revenue during the 25-year investment activity of the project.
Source: ANA-MPA