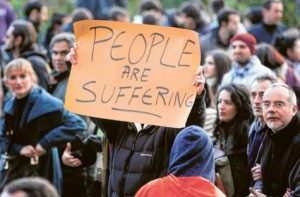 The Bank of Greece released its Monetary Policy Report 2015-2016 with some shocking admissions enclosed.
The report says that “while it takes longer to record the exact effect, trends show a deterioration of the health of Greeks in the years of loan agreements and austerity cuts.”
Although the BoG don’t come right out and say that the economic crisis and the overbearing austerity Greeks are living with is ultimately killing them, their report provides the statistics to prove that, indeed, the crisis is killing Greeks.
The reports’ conclusions in the chapter about “Reforms in health, economic crisis and impact on the health of population” are particularly jolting to say the least, and basically confirms that the physical and mental health of Greeks is steadily deteriorating due to economic insecurity, high unemployment, job insecurity, income decrease and chronic stress.
Suicides Rate Increased
The BoG report states that the “risk of suicidal behavior increases when there are so-called primary risk factors (psychiatric-medical conditions), while the secondary factors (economic situation) and tertiary factors (age, gender) affects the risk of suicide.”
Infant Mortality Increased
Almost a 50% increase has been seen in infant mortality, according to the report. This number is influenced by various factors such as the increase of deaths of infants younger than one year along with the decline of births by 22.1%. Previous numbers are shockingly contrasting for an infant mortality increase, at 2.65 percent in 2008 and 3.75 percent in 2014.
Increase of Mental Illness in General Population
Depression is a huge factor that many Greeks are currently dealing with, according to the report. Mental illness among the population has increased steadily over the years of the economic crisis as it was at only 3.3 percent in 2008 and more than doubled as the crisis started to brew, reaching 6.8 percent in 2009, soaring to 8.2 percent in 2011 and to 12.3% in 2013 and keeps climbing remarkably with each passing year.
Increase of Chronic Diseases
Another foreseen consequence of the economic crisis that Greeks are living with deals with healthcare and that many people do not receive medical help and treatments when needed because of lack of financial means. The people of Greece have seen an increase of chronic diseases by approximately 24 percent over the discourse of the economic crisis and the austerities that have followed.