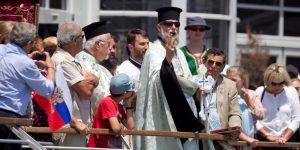 In Auckland‘s small Greek community a drama has been playing out for some time. It all started last August when a vote at the Hellenic Community‘s Annual General Meeting resulted in deciding to evict Father Paul Patitsas and his family from the church-owned flat they live in for free in Mt Albert in order to rent the property to generate income for the community.

The vote came about as the small Greek community does not have the finances to keep paying the utility bills for the flat Father Paul lives in with his family.

Father Paul was due to be evicted on June 15 but the Priest’s supporters have now threatened to take it to the High Court.

“This is going to go to another level with these guys,” said one former Hellenic Community committee member who spoke to nzherald.co.nz.

This past Monday a group of families from the community filed a civil claim against six Hellenic Community committee members, hoping to get an injunction against the eviction to let Father Paul and his family remain at the property.

The property is adjacent to the Greek Orthodox Church of The Holy Trinity on Western Springs Rd, however it is owned by the Hellenic Community. In the past it has been rented out to members of the general public and has helped raise an additional source of income to fund community activities in the small Greek community.

Nikos Petousis is the Greek consul in Auckland and has lived in the community for 60 years. He spoke to nzherald.co.nz expressing his frustrations regarding this matter.

“[Father Paul] works only a couple of hours a day. Of course he can say he prays for our souls every day, but he is not what we call in New Zealand working,” Petousis said.

Further adding to the flames of this drama, Petousis claims that both Father Paul and his wife have not been willing to find paid employment since their arrival in Auckland several years ago.

“That has irritated people,” he said.

“The Auckland community decided it can’t afford to look after the priest’s family because there are only about 100 families in Auckland. What cannot be debated is there is no money.”

Father Paul wrote an emotional letter with quotes from the Bible to his congregation last Wednesday, desperate to sway their decision.

“Is this too much to ask in return for my service?” he wrote.

Father Paul also spoke to nzherald.co.nz regarding the eviction and the woes of the Greek community and simply said that everyone needed to “have faith.”

“The church will grow and all our needs will be met,” he said.

Justice John Faire has delayed his judgement in this case until next week with high hopes that it can be settled out of court.