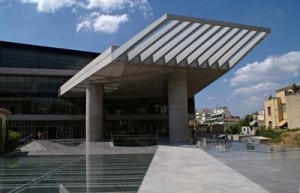 The outward-looking policy of the Acropolis Museum which has been its main focus since its opening seven years ago, has led to a steady increase in visitors, museum president Dimitris Pandermalis said on Wednesday, during a press conference to mark the anniversary.
According to the data, the museum has welcomed 9.5 million visitors since 2009 and aspires to exceed 10 million by autumn.
In the last year alone, (May 2015-June 2016) the Acropolis Museum opened its doors to 1,425,100 visitors. The majority of those are Greeks, followed by Americans, French, British, Italians, Australians, Spaniards, Canadians and Chinese.
“There’s stability in [the number of] visits and we have been able to retain the numbers since the first year,” Pandermalis said, presenting the museum’s annual results. The main aims for the seventh year of operation have been maintaining the high level of services to visitors, increasing digital applications in exhibition halls and introducing an innovative program for temporary exhibitions, he added.
The Acropolis Museum was built to house every object that has been found on the rock of the Acropolis and the surrounding area, which cover a wide period from the Mycenaean period to Roman and Early Christian Athens.
Source: ANA-MPA