Curious Case of Panayiotis Mavrikos: Body Identified, Mystery Over Cause of Explosion 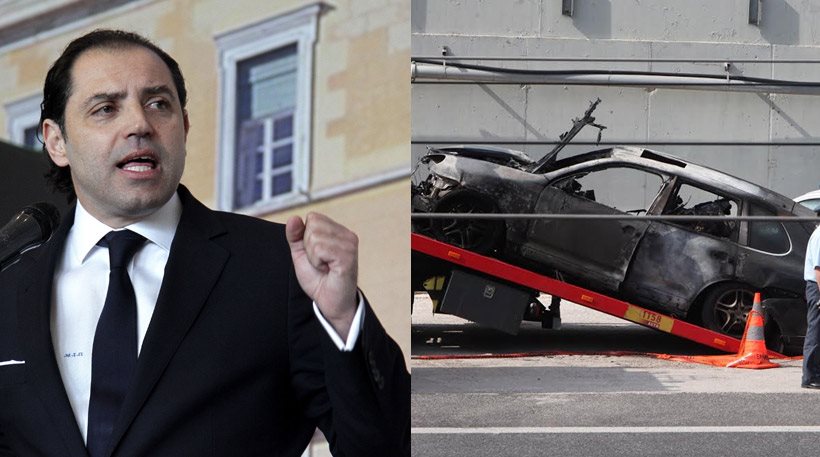 Greek police are investigating the explosion of Greek publisher Panayiotis Mavrikos’ Porsche while he was driving it on the Attica Highway on Thursday. The Acropolis newspaper publisher’s charred body was pulled out of the car, with speculation rocketing regarding the tragic accident bearing in mind his arrest earlier in the year on charges of trying to extort large sums in advertising from state-run companies.
Mavrikios, aged 42, had a meeting at Maroussi, a suburb north of Athens, and had parked his car there for an hour before the accident. He was headed to the offices of his newspaper, Acropolis, and had been driving for 20 minutes before the accident took place.
Police are analyzing CCTV footage that shows Mavrikos car traveling at around 110-115 km/hour on the highway until the Mall where his car begins to swerve and zig zag across the road. Instead of pulling over to the left side, he continues to swerve for 15 meters before stopping. Shortly before the point of immobilization fuel appears to leak from the car, and this could have caused combustion, however it is still unclear as to why the car was swerving.
Shortly after stopping, the publisher was unable to leave the car as his door was jammed, apparently stuck to the curb that was just 10cm from his door on the left. There are reports that Mavrikos panicked and tried, unsuccessfully, to break the window of his jeep.
Forensics experts are investigating the car with the results expected over the next two weeks, whereas toxicology tests are being examined to judge the state of Mavrikos himself. So far the DNA analysis has confirmed that the charred body was indeed that of Mavrikos. Reports state that further tests have been sent to the police lab and the laboratory of the University of Athens.
MEP Dimitris Papadimoulis tweeted on the incident stating that “they burnt Mavrikos before he could burn them.” The tweet leaves hints as to the integrity of the police and judicial investigations into the extortion case that the deceased was being tried for.
His friend and lawyer, Alexis Kouyias, points to foul play. He states that the car was in an excellent condition as it belonged to his wife and was often used to transport his children hence it was taken care of and mechanically sound.
https://www.youtube.com/watch?v=NzcV16PXF8I