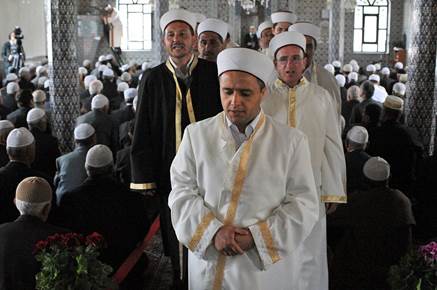 Greek Foreign Ministry sources on Wednesday fully rejected Turkish claims regarding respect for religious freedoms in Greece, calling them absolutely baseless, and again called Turkey to order over the Koran readings in Hagia Sophia.
“If Turkey has not yet understood or is not making efforts to respect its commitments for the protection of world cultural heritage monuments, this means that the country has not yet reached the 21st century,” the ministry sources said.
It was widely known that there is equality before the law and respect for citizens in Thrace, where democracy functions in a model fashion and more than 320 mosques operate without hindrance, they added.
The sources were reacting to a Turkish foreign ministry announcement saying that Greece “has for years not permitted the construction of a mosque in its capital” and accusing Athens of “constantly interfering with the religious freedoms” of a Muslim minority in western Thrace and “confusing opposition to Islam with modernization.” The Turkish side was in turn reacting to Greek foreign ministry condemnation of the Koran readings in Hagia Sophia for the purposes of a Turkish Ramadan television program as “regressive” and “not compatible with modern, democratic and secular societies.”
“Obsessions, verging on bigotry, with Muslim rituals in a monument of world cultural heritage are incomprehensible and reveal a lack of respect for and connection with reality,” the Greek foreign ministry said about the “sahur” programs in the Byzantine monument, which was secularized and made a museum in the 1930s by the Kemalic state.
Source: ANA-MPA