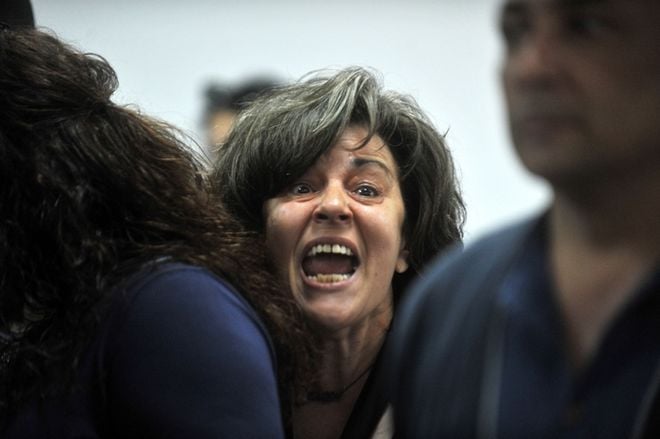 Prime Minister Alexis Tsipras, in an effort to speed up the trial of ultra-fascist Golden Dawn members, intervened on Friday in person. His decision to help speed up the process of justice followed a public appeal made by the mother of musician Pavlos Fyssas, a musician killed by individuals linked to the neo-nazi party in 2013. Technical issues, including the lack of appropriate venue large enough to host the trial, have bogged down the court procedure.
The victim’s mother, Magda Fyssa, and other members of his family on Friday visited Speaker of the Greek House, Nikos Voutsis, in the presence of Justice Minister Nikos Paraskevopoulos. The family called for the Golden Dawn trial to speed up.
Paraskevopoulos announced that he will send a written request to the president of the Athens Appeals Court Administration Council, asking for the current state of the trial to be assessed. Should the Appeals Court find difficulty in proceeding with the trial, it will need to reply.
“We know that the problem cannot be solved with a single action. Constant efforts are demanded,” said Paraskevopoulos. He had assured the Fyssas family that the government was doing all it can to monitor the process of the trial, however he did not appear hopeful concerning the speed at which justice will be delivered. The minister noted that his own role is confined to deciding the venue where it will take place, after consulting with justice regarding the way the trial is conducted on a daily basis, whether this is in the Korydallos court room or a space in the Appeals Court.
Paraskevopoulos noted the justice ministry has made available an additional courtroom with the necessary fittings for conducting large trials, which will be ready for use by October 5. He did, however state, that it was not within his jurisdiction to go beyond that because the independent functioning of justice cannot be violated.