Athens-Based Businesses and an NGO a 'Front' for Migrant-Traffickers, Police Say 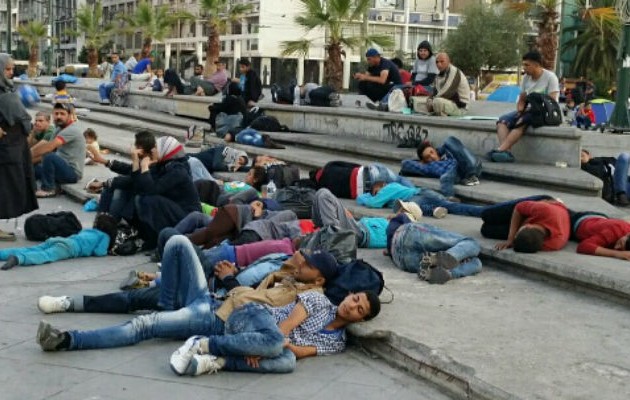 A group of companies and a non-governmental organizations, all based in Athens, Greece, were acting as a front for migrant trafficking outfits operating around Omonia Square, the Hellenic Police (ELAS) announced on Friday. The rings supplied refugees and migrants with fake documents in the EU but also in other countries, and were dismantled as a result of a months-long investigation by the Attica Aliens Police, in collaboration with police forces in other EU countries and Europol.
The two organizations were separate but operated simultaneously and collaborated with each other over the last two years, according to police. They were both dismantled during a police operation held on Wednesday under the code name ‘Ermis’ held under the EMPACT program for fighting illegal migration.
The police investigation revealed an international network with 105 members, of which 64 were in Greece and 51 in other countries. Authorities have so far arrested 16 individuals in Greece, among them eight Bangladeshi nationals, six Sudanese, one Pakistani and one Syrian. At least three individuals were arrested in the Czech Republic and four in France.
Police also discovered two workshops used to make fake documents in Athens, including forged passports reported as lost in the Schengen system. The alleged mastermind of one organization was a Bangladeshi national that had set up a group of businesses that included a hotel, restaurant, travel agency, money transfer bureau, shop and internet service provider, as well as the NGO ‘Hara’ that were fully legal but served as a front for his illegal activities.
The NGO’s role has not been fully clarified but authorities know that it provided food and other services to foreign nationals using legal procedures. It is now being investigated for money laundering.
The ring operated mainly by producing fake travel documents and other papers and used airline flights to move people to Europe and between European countries, investigators said. It charged fees ranging from 100 euros to 3,000 euros for its fake documents and services.
The second organization operated in a similar way to the first but was manned mainly by Sudanese and centered around a mobile phone accessory outlet in Athens.
The members of the gang are linked to individuals that have prior arrests on similar charges in Athens and Chios. They were all led before an Athens first-instance prosecutor.
(source: ana-mpa)