GRNews
GreekReporter.comGreek NewsArchaeologyWeighing the Evidence: Is It 'Really' Aristotle's Tomb?

Weighing the Evidence: Is It 'Really' Aristotle's Tomb? 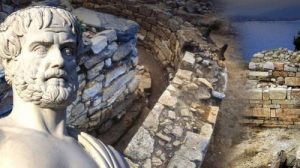 Archeaologist Kostantinos Sismanidis had a moment of revelation after 20 years of excavations at the site of ancient Stagira. Suddenly, it occurred to him that the structure he had excavated in 1996 could not be anything else but Aristotle’s last resting place.
In front of 250 international colleagues from forty countries — foremost in their field — Sismanidis took the stage of the Aristotle 2,400 Years Conference to announce his important discovery. Though he had no hard facts, there were indications that the structure uncovered at Stagira was indeed the 2,400-year-old tomb of Aristotle. If the findings are true, then the tomb is the most important discovery to be made at the 20-year-old excavation, located in central Macedonia, near the eastern coast of the Chalkidiki peninsula. 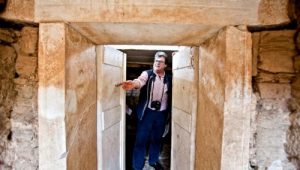 Much of the evidence to support his claim is circumstantial, but though proof is lacking there are a number of factors to support his claim:
♦ Aristotle’s was born at Stagira in 384 BC and had a close connection with the place.
♦ Sismanidis claims that though Aristotle died in the area between Chalcis and Eretria in Evia in 322 BC, his ashes were transported back to the place where he was born by Stagira’s residents because he was their hero. Thanks to Aristotle’s mediation with King Philip of Macedon, Stagira was rebuilt in 340 BC after it was destroyed by the same king in 349 BC. Two literary sources support this claim, they are text no. 257 of the Marciana library and an Arabic biography referring to the transfer of Aristotle’s remains by people from Stagira in a bronze urn. Next to it, they erected an altar and called the area “Aristoteleion.” The site became the meeting spot of the council.
♦ Proof of the public character of the tomb is ample: the shape of the tomb, the period it was erected, its location and the quality of material indicates that the occupant was greatly respected. The structure originally had a roof with tiles from the royal pottery workshops. It was located in the middle of a square marble floor, and a wide road led to the tomb’s entrance making it accessible to those wishing to pay their respects.
♦ 50 coins found at the tomb indicate a link with Alexander the Great, who was Aristotle’s most famous student.
Then there are the question marks:
♦ The structure has been standing at Stagira for 20 years, why did Sismanidis wait so long to make his revelation? The announcement was quickly dubbed the “Amphipolis of the Left.”
♦ The area is found just a few kilometers away from the controversial Skouries mine, a high-grade gold-copper porphyry deposit located in the Halkidiki peninsula that was planned to operate as an open pit mine for about seven years, followed by approximately 20 years of underground development. However, in January 2016, Eldorado Gold suspended work on the controversial Skouries mine, with the decision coming after a year of confrontations with the Greek government that included permits being revoked and delayed by the state multiple times, principally due to environmental concerns, and local opposition. An important finding such as Aristotle’s tomb in the area would further weigh the balance against the operation of the mine.
♦ Though archaeologists point to Sismanidis as a respected scientist, they are critical of his decision to make his announcement at a conference where the findings would not be put to tough scrutiny by archaeologists but at an event of a philosophical character.