TechNews
GreekReporter.com USA The History of Greektown, Chicago from the 1840s to Now

The History of Greektown, Chicago from the 1840s to Now

As with many cities throughout North America, the creation of Chicago’s Greektown came about as a result of Greek ship captains arriving in the city during the 1840s from New Orleans by way of the Mississippi and Illinois Rivers.

They came to America with dreams of prosperity, but they were not afraid to work the hardest jobs. Many began as food peddlers, and with determination and good work ethic, eventually became restaurant owners.

In fact, before World War II, Chicago boasted the largest Greek settlement in the USA. This is how Chicago’s Greektown earned its iconic status in the diverse, multicultural city.

Many people do not know that Chicago’s first Greektown originally was known as “Deltaîbut”, but as Greeks began purchasing restaurants, they moved away from the areas of Fulton and South Water Street Markets and settled around the Harrison, Blue Island and Halsted areas.

This neighborhood soon became referred to as “Greektown,” and was eventually renamed as such. 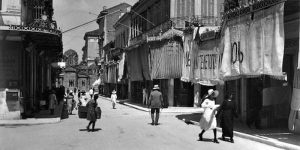 The geography of Greektown has changed dramatically over the years, since it once was sprawling and much larger than the few city blocks it encompasses today. In the 1960s the construction of the Eisenhower Expressway and the University of Illinois at Chicago displaced the ethnic town, and forced it to move a few blocks north.

The community dispersed to other existing Greek settlements such as Ravenswood, Woodlawn and South Shore. Today, the small strip on Halsted is typically hailed as the heart of Greektown, as the Sears Tower (now the Willis Tower) looms over the town in the distance.

During the late ’60s, Chicago’s Greektown was one of the first to introduce gyros and saganaki to restaurant cuisine. From the ’70s through the ’90s, business was booming so much that the majority of the restaurants and business that are open in current day Greektown date back to that time.

Annual festivals such as the Taste of Greece summer fest also became a tradition during that heyday. 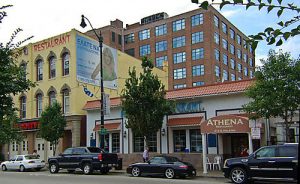 Greek town received a facelift of sorts during the mid-1990’s when the Democratic National Convention came to town. Acknowledging Greektown’s important role in shaping the diversity of the city, Chicago allocated millions of dollars for street renovations and construction of monuments of Greek temples and pavilions at the major intersection of the town.

These contributions are still notable today and are well looked after in an ongoing effort to preserve the Greek culture of Chicago. 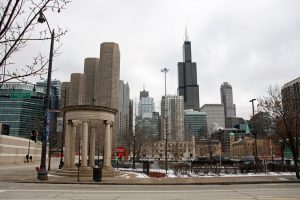 Today, Greektown remains vibrant. It still represents a cultural hub for the third-largest population of Greeks living in the USA. It is estimated that approximately 150,000 people of Greek ancestry live in the greater Chicago area.

This allows Greektown to continue to serve as a contemporary gathering place for current generations, where you can still hear people speaking in Greek in the shops and restaurants. Even the Walgreens Drugstore on the corner on South Halsted has neon signs in the Greek language, and continues to light them up each and every night.