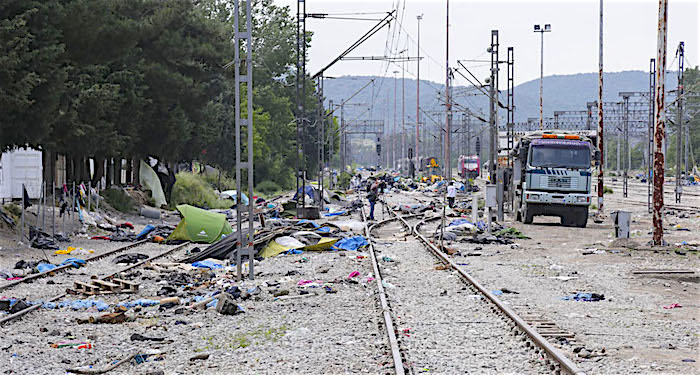 Greek public broadcaster ERT reported that the eviction of refugees and migrants from the town of Idomeni is complete. The site, near the Greek border with the Former Yugoslav Republic of Macedonia (FYROM), was a gathering spot for people seeking to cross to other countries in Europe.
The unofficial camp in the area was overcrowded and reportedly rife with crime. Police began clearing the area on Tuesday. By Thursday morning, there were just 1,500 people left at the camp that once housed as many as 14,000 migrants after a number of Balkan states closed their borders with Greece. Bulldozers began clearing away tents and debris.
Public Order/Citizen Protection Minister Nikos Toskas expressed his satisfaction over the evacuation of Idomeni during his visit to the site on Thursday accompanied by Alternate General Secretary of the Ministry of the Interior, Tzanetos Filippakos, and Greek Police Chief Konstandinos Tsouvalas.
“We did not come to celebrate,” said Toskas. “We came to see a different situation. The operation proceeded as planned and with respect to the basic human rights of these people who came either because they were chased or to save themselves or for a better future. We did not prevent them from going where they wanted. It is not Greece that raised fences, however we had to deal with the situation.”
He said that 5,000 of the people at the camp were transferred to organized camps. Another part, however, fled in fear to other unofficial camps.
When asked why the media was not allowed to document the evacuation, apart from the Athens News Agency and ERT public broadcaster, Toskas said that this is the way in which such conditions are carried out around the world. He said that media presence would have made the operation more difficult and dangerous.
Journalists who went to Idomeni were accompanied by the police and were allowed to move along the railway line.