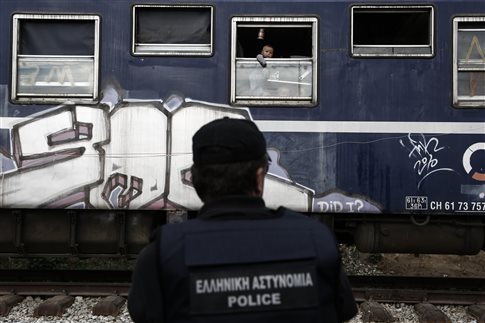 The second day of the evacuation of the makeshift refugee camp at Idomeni was deemed a success by the Greek government with only 1,500 migrants left in the area on Wednesday night.
A total 1,003 refugees and migrants were removed on Wednesday with the total so far being 3,034 according to figures given by the committee for the migrant crisis. The migrants boarded buses that took them to five organized hospitality camps at Sindos, Oreokastro, Derveni and Kordelio.
However, there is discrepancy in the total number of migrants and refugees at Idomeni. According to official estimates, about 8,200 people were at the camp before the evacuation operation. With 3,034 removed so far, and about 1,500 still at the tent town, there are 3,700 people unaccounted for.
Police have combed the area around Idomeni for refugees who were possibly hiding in the surrounding woodland but didn’t find any migrants hiding there. At the same time, Former Yugoslav Republic of Macedonia authorities said there were no migrants crossing the border illegally.
Police officials presume that many migrants fled the area before the evacuation operation in fear that they might be trapped in the official migrant camps.
On Friday, TRAINOSE will run the first cargo train in 70 days, since the railroad line was occupied by refugees protesting against the closing of the FYROM border. TRAINOSE says the total financial damage for the company reached 2.5 million euros.
Also, after a request by the citizen protection ministry, the state railroad company is to build a protective fence around the railway line at Idomeni to prevent future sit-ins.