GRNews
GreekReporter.comGreeceMany Refugees at Idomeni Refuse to Move to Proper Camps in Greece 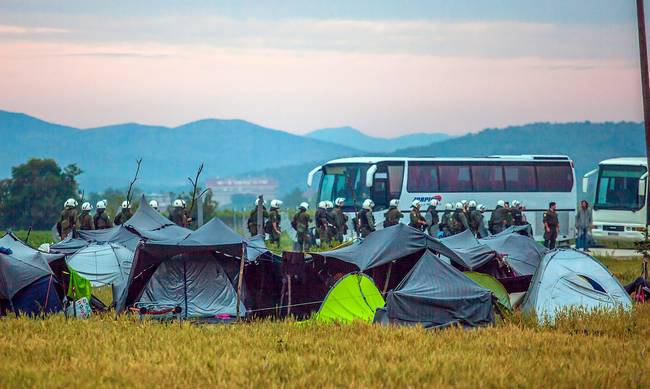 The evacuation of the makeshift migrant camp at Idomeni is not going according to the plan of Greek authorities as many migrants refuse to board the buses that would carry them to official hospitality facilities.
According to a Skai television news report, many refugees and migrants told police that they don’t want to get in the coaches and leave the area and that they would leave the camp on foot.
Some of them spoke to reporters saying that they don’t wish to move to migrants camps because they believe they would be trapped there. By staying on the loose, they said, they will have the chance to cross the border and continue their journey to more prosperous northern Europe.
According to Hellenic Police, many refugees left the area on their own — some by taxi — in order to go to migrant camps of their choice in other parts of Greece.
Police moved all the tents that were set on the railroad tracks, that were blocked for two months by migrants protesting the closing of the Former Yugoslav Republic of Macedonia border.
The Idomeni camp evacuation operation started on Tuesday morning with police barring reporters from the area, with the exception of state broadcaster ERT and state-controlled Athens News Agency.
On Tuesday, 2,031 migrants were transferred on 42 buses without any problem. They were put in migrant camps near Thessaloniki. On Tuesday night, Greek authorities estimated that there were 6,000 people left at Idomeni.
According to authorities, the process of evacuation will be completed by the end of the week.