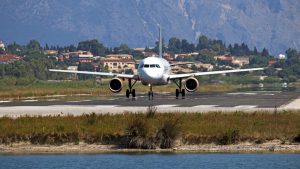 On Monday, the Greek parliament concluded ratification of contracts for the concession of 14 regional airports, a move welcomed by Fraport as they noted that this is one of the biggest investments in Greece. The contracts for the concession of the airports is anticipated to affect tourism in Greece with positive outcomes. “We are convinced that our engagement in Greece will act as a catalyst for the growth of the country’s vital tourism sector,” said Alexander Zinell, Fraport Greece’s CEO.
The airports included in the contracts are the three mainland facilities at Thessaloniki, Aktion and Kavala. Also, there are 11 island facilities that make up the remainder of the 14 regional airports, including Chania in Crete, Corfu, Kefalonia, Kos, Mykonos, Mytilini, Rhodes, Samos, Santorini, Skiathos and Zakynthos.
It is estimated that over 23 million passengers passed through the airports in 2015 and that 73 percent were international travelers visiting Greece for business and holidays. These figures are a 6 percent increase from 2014 and it is expected to rise further in 2016.
After the Greek parliament’s decision passed, Zinelli released a statement that explained the company’s commitment to its ongoing business venture in Greece and the Greek people, saying, “A successful ratification sends a strong message to the global market: Greece is looking forward, creating a new dynamic environment for investments in the country.”
Furthermore, he noted Fraport’s enthusiasm in moving forward in securing “comprehensive planning” for its tasks at the 14 regional airports and that “the relevant parties can now move full speed ahead toward the implementation phase…Well-managed airports around the world have proven to serve as economic engines, which is also a goal for the Greek regional airports, with anticipated economic spin-off effects for industries such as hospitality, travel services, retail, construction and various services. The positive response already received from business leaders and other stakeholders is very exciting for this shared journey into the future.”