GRNews
GreekReporter.comGreeceHoly Synod of the Greek Orthodox Church to be Held June in... 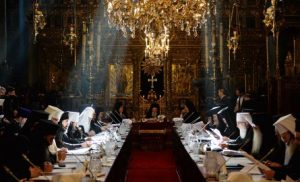 The next Holy and Great Synod of the Orthodox Church will take place at the Orthodox Academy of Crete, in Kolymbari, west of Chania. More than 400 bishops representing 300 million Greek Orthodox Christians from around the world will gather along with many clerics, theologians, observers and academics. The monumental gathering of the world’s Orthodox Christian hierarchs to take place from June 16-27 is the first since the East-West schism in 1053.
Topics to be discussed include issues relative to the Orthodox diaspora, administration matters concerning the autonomy in semi-independent Churches, alignment of calendars, canonical marriage impediments in the case of inter-Christian marriages, changing to fasting, the relationship of the Orthodox Churches with other Christian churches, etc.
The last Pan-Orthodox Council took place in Constantinople in 879-880 A.D. with more than 380 bishops in attendance. The heads of the church decided at a meeting in Switzerland to relocate the synod, where the Ecumenical Patriarchate of Constantinople is based, away from Istanbul. The Russian delegation would have been prevented from attending the meeting that will include participants from 14 independent bodies from Constantinople, Alexandria, Antioch, Jerusalem, Georgia, Cyprus, Bulgaria, Serbia, Russia, Greece, Poland, Romania, Albania, the Czech Republic and Slovakia.