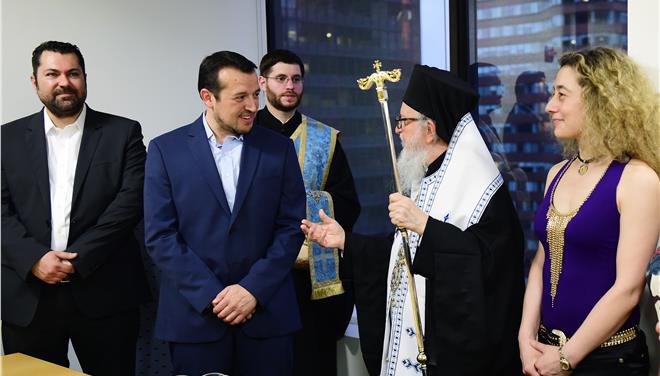 The new offices of the Press and Communication Office, Permanent Mission of Greece to the UN in New York and the Greek National Tourism Organization (EOT) at 800 3rd Avenue were inaugurated on May 14 by State Minister Nikos Pappas.

Pappas stated that the sharing of the premises is highly significant, as tourism is the means whereby Greece is viewed by the world, according to Greek News weekly.

“At a time when Greece’s message to the world should be powerful and coordinated, we are coordinating forces here both to save resources and to organize ourselves in order to show that Greece has entered a new phase,” Pappas said.

Archbishop Demetrios, who consecrated the premises with holy water, said: “We believe and pray that this center be the broadcast center of world Hellenism, which is beyond any generation and any national limit, and of Orthodoxy, our base from which to move forward.”

Sia Papatriantafyllou, director of the Press and Communication Office of the UN Mission, said that by sharing a common space, the two agencies can now “develop new technologies toward an optimally effective outreach of Greece in North America.”

“We launched, almost a month ago, a Facebook page entitled “Greece in New York” with the goal of informing the greater public about the initiatives of the Greek authorities in the United Nations and the New York City area. Facebook is an easily accessible means of promoting Greece’s strong assets, especially Tourism, Culture, and Gastronomy — with capital letters! — to help with rebranding Greece and to act as a bridge between the homeland and the Hellenic Community of New York City and that enormous public who are interested in all things Greek and want to know more,” Papatriantafyllou told Greek News.

Papatriantafyllou added that along with the EOT office they will organize events and activities that will increase Greece’s visibility.