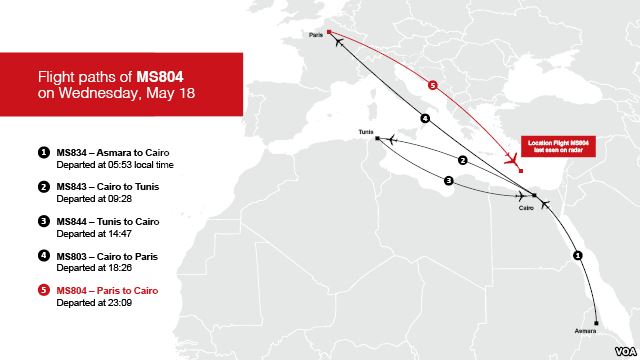 Search crews have found human remains, along with the personal belongings of passengers from EgyptAir Flight 804, but are still searching for the bulk of the wreckage.
Looking for clues to understand why the jet carrying 66 people crashed into the Mediterranean Sea, search teams sought to find larger pieces of the plane or the location signal from flight recorders.
The European Space Agency said one of its orbiting spacecrafts spotted what could be an oil slick 40 kilometers southeast of the plane’s last known position and the information had been passed on to relevant authorities conducting a search mission.
The agency released a grainy photograph of the scene which showed little detail and cautioned there was no certainty the slick was from the aircraft.
Also on Friday, Egyptian authorities say they are investigating reports that there was smoke on the flight before it crashed. 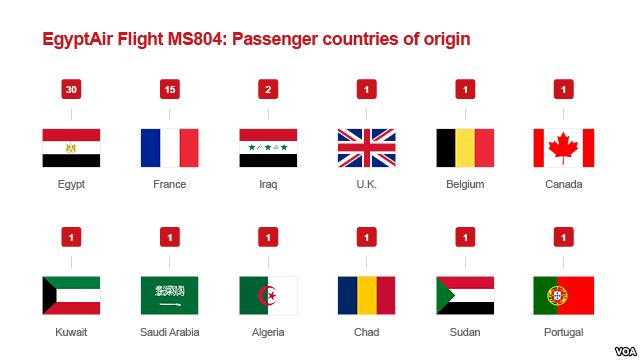 An aviation industry publication reported that sensors detected smoke in the lavatory, indicating that there could have been a fire on board the plane.
Egypt Aviation Minister Sherif Fathy has said a terrorist attack is a more likely cause for the crash than technical failure. But so far no clear evidence has emerged as to what brought the plane down. No militant group has claimed to have carried out an attack.
The plane disappeared into the Mediterranean Sea, north of the Egyptian coast, on Thursday while headed to Cairo from Paris.
The Airbus A320 had been flying normally when it suddenly swerved radically and plunged more than 11,000 meters into the sea, never issuing a distress signal.
Three French investigators and a technical expert from the A320’s manufacturer, Airbus, arrived Friday in Cairo to aid in the investigation.
U.S. Secretary of State John Kerry offered Egypt continued support for the search Friday. Kerry told Egyptian Foreign Minister Sameh Shoukry the United States promised to stay in close contact as the investigation progressed. Egypt, France, Greece and the U.S. are among nations deploying planes and naval vessels to search for the plane.
(source: VOA)