Wreckage of EgyptAir Jet Found at Sea, 290 km From Alexandria 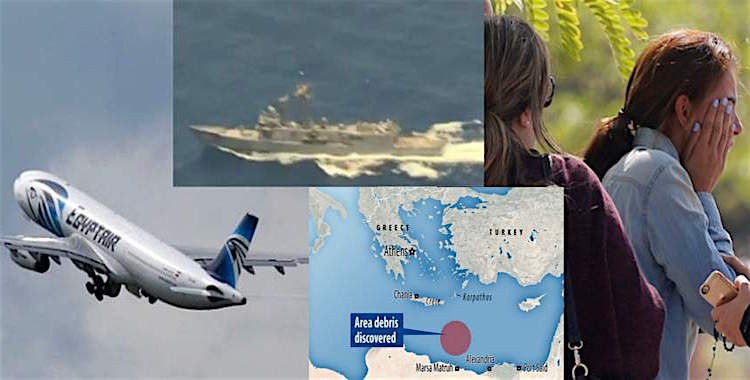 Wreckage of the Egyptair aircraft lost Thursday from radar were detected in the Mediterranean, 290 km north of Alexandria, according to an Egyptian television broadcast.
The TV report said that some personal belongings of passengers have been found, while the Egyptian Navy is combing the area in search of the jet’s black box.
Greece’s defense minister says Greek authorities have received notification that Egyptian authorities had spotted a body part, two seats and suitcases during their search in the Mediterranean Sea for the crashed EgyptAir Flight 804.
Minister Panos Kammenos says Friday that the items were found in the search area slightly to the south of where the aircraft had vanished from radar signals early Thursday.
He said the location was slightly north of where some debris had been found on Thursday afternoon but authorities had been unable to identify that as having come from the missing aircraft.
Earlier reports that the plane’s wreckage had been located near a Greek island were incorrect. Authorities said late Thursday that they had not confirmed that any debris from the plane had been found.
Egypt said terrorism was a more likely cause of the disaster than technical failure, but no definitive information was available.
EgyptAir said the Airbus A320, with 66 people on board, disappeared from radar about 2:30 a.m. Cairo time, when it was 11,000 meters above the Mediterranean, and just 16 kilometers inside Egyptian airspace.
In Cairo, Egyptian Aviation Minister Sherif Fathy said France would be responsible for any security lapse if terrorism was found to be the cause of the crash.
Fathy also offered the theory that terrorism loomed larger than mechanical problems as the possible cause of the crash.
“If it is proven that this was an act of sabotage, then we have to know and recognize that this plane originated from France and not from Egypt,” he said.
In the U.S., President Barack Obama was briefed on the latest developments at the White House.
(with information from VOA)