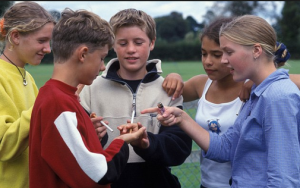 The European School Survey Project on Alcohol and Other Drugs (ESPAD) revealed alarming statistics for Greek teenagers. The study, conducted on behalf of ESPAD by the University Mental Health Research Institute of Greece, found that teenagers begin to smoke cigarettes and experiment with alcohol from 13-14 years of age with a rapid growth spurt at 17-18 years.  Those who live in regional areas were found to engage more in smoking and drinking than their peers in Attica where Athens is located.
ESPAD’s study of teen habits has been ongoing for the last 25 years. From 1984, when the study began, a rise in teen smoking was noted between 1984 and 1998, followed by a downward trend from 2003 through to 2011, however one in five students aged from 13-14 years have smoked in the last month according to the research, whereas one in seven students are systematic smokers. The smoking peak is reached at the ages of 17-18 years when 24.5 percent of teenagers smoke, and the level rises to 51 percent at the age of 19 years.
In Thessaloniki, northern Greece, there are more teenagers who smoke more than half a pack a day. Regions with the highest rate of teen smoking are the north Aegean, east Macedonia, Thrace and Attica. Western Greece, Epirus and west Macedonia have the lowest rates of teen smoking.
Alcohol use is also widespread with one in five teenagers from the ages of 17-18 years drinking more than twice a week, with the figure rising to 26.8 percent at the age of 19 years. One in four adolescents aged from 17-18 years (22.7 percent) have experienced drunkenness more than twice, whereas the figure rises to one in three for the age of 19 years (32.8 percent).
Drug use among teenagers has also seen an alarming rise, having tripled since the study began. Only 6 percent of students aged between 15 and 19 years had tried drugs in 1984, however the figure shot up to 15.3 percent in 2011 and is noting a steady rise.
The main choice of drug is cannabis. One in seven students have tried cannabis from 17-18 years over the last year. The percentage of boys aged 13-14 years that say they have tried cannabis at least once is at 2.6 percent while for girls of the same age group is 0.9 percent.