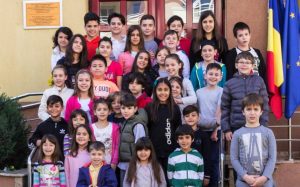 As the economic crisis in Greece continues, many Greek businesses and families have made the move to Romania in hopes of a brighter future for themselves and their children. The size of Romania’s Greek community is growing at a considerable rate, as last year the number of Greek-owned businesses rose from 256 to 6,278. This increase has left the Greek population in this former communist state at nearly 15,000. With numbers like these, the Greek community fears that their children’s education is at risk.

In 2008 a group of Greek parents in Romania banned together with Greece’s Education Ministry to establish the first and only Greek-language school in the country known as the Greek school of Bucharest, “Athena.” It is a mutually prosperous venture, as the Greek children in Romania receive an education and teachers from Greece are relocated to teach at the school. As the school was initially set up, each year there were higher levels of educational classes added as the students grew older. “The school initially taught first and second grade, and more grades were added as pupils moved up to the next class,” says Andreas Laspadakis, a member of the parents’ association.

The situation today is that this community of expats is in desperate need of a high school for their children to attend. “Parents are in a difficult position. Some of the kids will finish primary school this year and they are worried about the future. Some will take their kids and go back to Greece, while others will put them in an American or British school. Unfortunately we now risk losing many of the kids. The sustainability of the school is at risk as the annual cost is high and is covered by parents and a small number of Greek firms,” Laspadakis explains.

There is an uncertainty for the Greek families of Romania as they wait to see what solutions will come about. “When the school opened in 2008 it was 20 kids,” Laspadakis said. “Things are quite different today as the number of families fleeing crisis-hit Greece is continuing to rise.”

The parents’ association is currently discussing this issue with The Greek Ministry, however, with the academic year nearing to an end, it seems more and more unlikely that any decisions will be made in time for the sequential school year.

It was announced on Wednesday that Greeks have cut their smoking by more than one half over the last decade, according to a new ELSTAT survey.
Food

Feta, Greece's most famous cheese, has become viral world-wide thanks to a food blogger who recently created an easy and tasty recipe of feta with pasta.
Cyprus