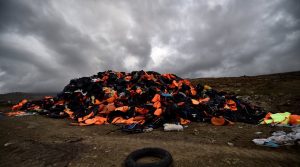 As the hundreds of thousands of refugees who landed on the Greeks shores of the island Lesbos have moved on to mainland Europe or refugee camps, they left behind something that helped them safely reach the island, their life jackets. They were thousands of life jackets scattered everywhere from the beaches, roads and slowly filled a municipal dump site that has come to be known as the “life vest graveyard.”
As piles of orange slowly reached higher and higher as some reached 25 feet into the sky there were other materials being left behind as well. Discarded dinghies that were used to cross the seas also provided a constant reminder of the tragic refugee crisis, as well as creating a new concern for the island’s ecological well-being. The mayor’s office described the situation of the surmounting refute as “an environmental ticking time bomb.” Many of the volunteer groups on Lesbos agreed, and decided to turn the tragedy into something positive, not only for the environment, but more importantly, for the refugee crisis.
Creating Much Needed Supplies from Discarded Rubbish 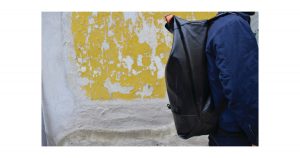 It all started from a trip to Lesbos last December when Stefanos Levidis, a London-based architecture student originally from Athens, along with partner Sofia Georgovassili, saw an opportunity to help the refugees with their skills set. “There’s tons of material piling up on the island which will be buried or burned so we thought, let’s design something out of it,” says Levidis. Original ideas focused on turning the life jackets into emergency blanket ponchos or ladders to help refugees better access coastlines on the islands upon arrival. But as they continued to observe the crisis, they realized that when people arrived the island, what they were missing was backpacks and a means to carry any possessions or supplies. Volunteers created many different preliminary ideas, and eventually a NoBorders Backpack came to fruition.

The NoBorders Backpacks, created from the dinghies left behind is one of many designs the volunteers dreamt up and put into action for the discarded plastic. Other groups have used dinghies to create temporary shelters and life jackets have been used to create much needed mattresses. Even ribbons to be worn as a show of solidarity with the refugees have been made from the orange vests, directing all proceeds back to the relief efforts in Greece.

A Look at Long-term Solutions
Another volunteer moved to action following a trip to Lesbos last December is Jai Mexis. While on Lesbos he had created temporary shelters from dinghies and other materials on the beach, which inspired him to found the organization, Odyssea, with partner Irene Psifidi. The two founded Odyssea in hopes of finding a long-term solution for the growing environmental problems on the islands, as well as give something back to the refugee communities.
Lexis and Psifidi devised a plan for Odyssea in two parts. Initially, holding workshops for refugees to teach them how to create bags and mattresses from the discarded materials and, secondly, to create products that can be sold commercially and can be a form of income for both the refugees and locals. Their long-term goal is to open a workshop in Athens where they can test products as well as employ refugees for production of the goods. They have recently been granted legal permission by Lesbos to start their project and say that they are now working with other organizations outside of Greece by distributing the life jackets to be used all around the globe in social art projects or other goods.