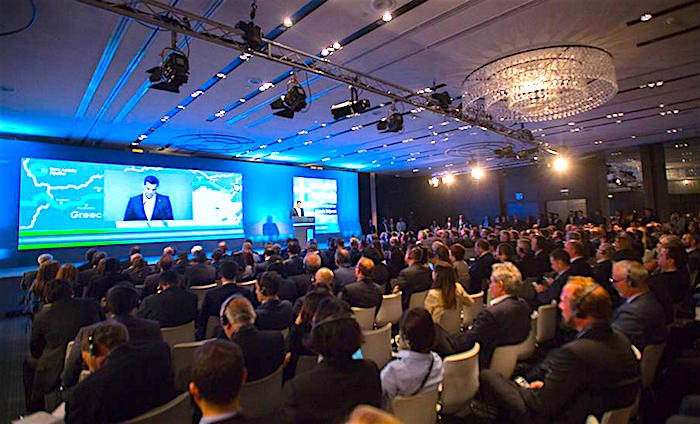 Radical Left Coalition (SYRIZA) Prime Minister Alexis Tsipras said Greece is entering a new era, leaving a period of instability and uncertainty behind, during his speech at the inauguration of the construction of the TransAdriatic Pipeline (TAP) in Thessaloniki. He appeared confident that Greece is entering a new era, putting the worst behind it, pointing to predictions for a positive rate of growth, whereas he stressed that the bailout agreement would allow funds to immediately be disbursed and offer relief to the market easing unemployment and growth.
Specifically, he pointed to the inauguration of the TAP natural gas pipeline as a precursor for a new era for Greece. He said that becoming an energy hub is the cornerstone of the Greek strategy. The pipeline project, worth more than 1.5 billion euros, is one of the largest direct foreign investments for Greece placing the country firmly on the energy map of Southeast Europe, added the prime minister.
Apart from benefits to energy security, the project paves the way for more than 8,000 job positions.
The TAP pipeline creates a Southern Corridor, carrying gas from the Greek-Turkish border across Greece, Albania and the Adriatic Sea, coming ashore in southern Italy.