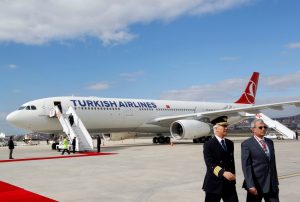 The rapid development of Turkish Airlines has caused the company to seek experienced pilots from abroad. The Turkish carrier employs 77 Greek pilots from its total crew of 4,500 pilots, 800 of which are foreigners. This means that Greeks make up a large percentage of foreign captains employed by the group.

Greek pilots are especially respected by the carrier as they are knowledgeable in the fast and secure transport of hundreds of thousands of passengers that the carrier takes to 285 destinations. In a statement released by the company, the exponential growth that has led to its need to hire experienced pilots that meet rigorous safety standards and specifications was outlined.

Greek Captain John Stavrianos has worked with the carrier for four years and points to numerous advantages, such as Turkey’s closeness with Greece that allows him to stay in touch with family and friends. “I visit Athens, even when I have just a day off,” he says. The pilot points to the company’s rapid growth. “When I first joined the force, I remember that they had just acquired the 200th plane. Four years later, they now have 309 airplanes,” he says. Furthermore, destinations offered by Turkish Airlines have also doubled.