Olga Gerovasili: We Are Keeping Greece on its Feet 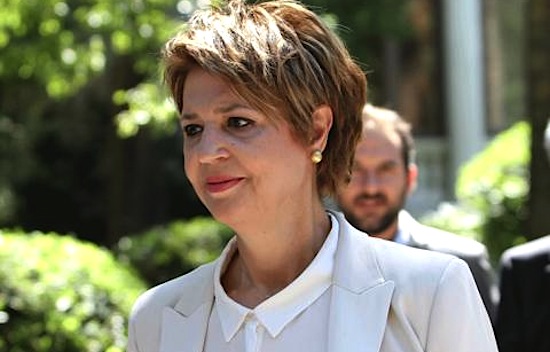 There will be an agreement on concluding the review of Greece‘s programme on May 24, government spokeswoman Olga Gerovasili predicted on Friday in an interview with Stigma Radio 97.6, a local station broadcasting from the Ionian island of Zakynthos. The government was keeping the promise it had made at the September elections to the keep the country and Greek society on its feet, to defend the weakest and middle-income economic strata, she added.
Pointing out that the primary surplus in 2015 was higher than forecast, she said that the mechanism, if it existed now, would not have been activated. “I remind you that the forecasts for next year are excellent and therefore it will not be needed. This brings us to 2018, where we have an agreement for a primary surplus of 3.5 percent of GDP. We also consider this high, it is true. However, we first have two years of recovery for the Greek economy and, together with the discussion on the sustainability of the debt and the proper approach to its management, we should have absolutely no problem,” she said.
The government was confident that an agreement on the review will be reached at the May 24 Eurogroup, based on the statements of the officials taking part in the negotiations, she said. The discussion that would likely take longer and last some time was that on easing the country’s debt burden, the spokeswoman added, noting that a road map on the actions and discussion regarding the debt was decided at the previous Eurogroup meeting.
“It is very significant that such a map has already been drawn up as a decision, something that has never happened until today. That there is recognition by all sides, finally, that there must be a management of the debt. It is a step that we did not have, regardless of whether some general principles or hopes had been expressed earlier,” she said.
Gerovasili also insisted that the measures now being voted on and implemented were not new measures but those agreed in July last year, “not one euro more.”
Gerovasili said the government had succeeded in its goal, which was to make the targets set under the agreement sustainable and achievable. “Therefore, we have more reasons today to talk optimistically about the recovery of the economy and, by extension, of society. All our efforts were to get out of this situation quickly, effectively, with new direction and with society still standing,” she said.
Source: ANA MPA