The English Theatre Club: Providing Entertainment and Education for Children in Athens 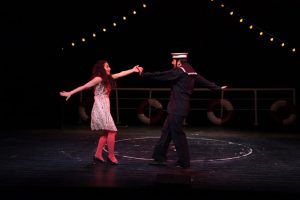 Originally launched in 1990 as a theatrical workshop for teaching English through Drama, the English Theatre Club has been performing in Athens as a theatre troupe since 2004. Assembled by a core of international actors and teachers much like a repertory, the troupe has produced hundreds of plays and puppet shows for children of all ages.
The mission of the English Theatre Club is to provide an interactive traveling theatre production that encourages the audience, made of children, to participate in the shows while learning English. 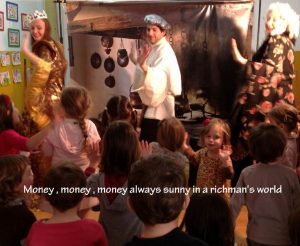 “Our interactive theatre approach encourages audience participation with everybody joining in the singing, chanting and cheering” said Tessa Clark the founder, main writer, teacher, director and actress of the English Theatre Club.
The troupe travels to theatres, parks and schools in the greater Athens area, providing teachers with scripts beforehand, to help familiarize and teach the students vital vocabulary to help them benefit most from the show. Once the show has begun, the actors call upon the students to come up on stage to help fill the role of characters. 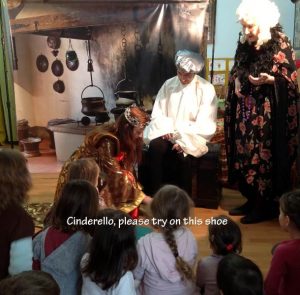 While children are mesmerized by the live theatrical performances, parents and teachers alike have noted the importance of the performances as a part of English teaching curriculum at schools. The theatre has gained attention from the Athens News as well as some school papers such as The Peter Pan school that wrote an article highlighting a recent performance, saying “the children are always mesmerized by being so close to the actors and the interactive nature of the play encouraged the children to actively take part. All the children were eager to join in the fun and get up
on stage.”
Past shows have been adaptations on classic fairy tales and children’s stories such as “Snow White,” “Cinderella” and “The Emperor’s New Clothes,” as well as the original plays “Sherlock Holmes and the Mystery of the Crypt” (2006-2007), “Surprise Party” (2007-2008), “The Cambridge Art Gallery” (2008-2009), “The Princess and the Pea” (2009-2010), “The Emperor” (2010-2011), “Dangerous Dining” (2011-2012), “Cinderello” (2012-2013), “Out of Space” (2012-2013).
For their 2015-2016 season the English Theatre Club is performing “Lady Macbeth’s dinner party”  Images of Shakespeare’s Plays, “Cinderella,” and “Little Red Ridinghood.”
For more information on shows or bookings:
Telephone: 210.363.1217
http://englishtheatreclub.com/

How Advertising Through the Ages Has Shaped Christmas