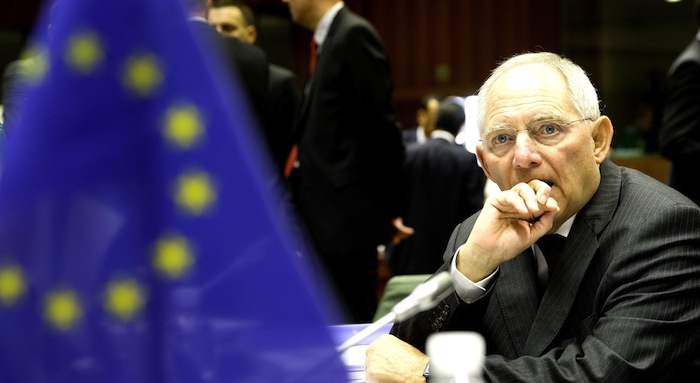 German Finance Minister Wolfgang Schaeuble said that there is no need for a Greek debt haircut at present and expressed optimism that Athens and lenders will come to an agreement over the bailout program review in two weeks.
Schaeuble spoke during a dinner organized in his honor by German financial newspaper Handelsblatt. “Right now there is no need for a real haircut of the Greek debt,” he said, elaborating that Greece is already free of the debt burden for ten years. If the debt is not sustainable in the medium term, then creditors will see to it again.
The German minister further explained that since loan maturities from the European rescue fund have an average length of 31 years, a debt haircut is not necessary.
On average, he said, loan repayments to the rescue fund are postponed for ten years and so are interest payments. He also said  that the numbers in Greece’s labor market are better, the economy is growing and the deficit is lower.
Regarding the ongoing negotiations between Greece and international creditors on the bailout program, the German minister said he believes that in the May 24 Eurogroup the two sides will converge and an agreement will be reached. Yet, he warned that the path of long-term adaptation will be difficult and difficult politically for Prime Minister Alexis Tsipras.