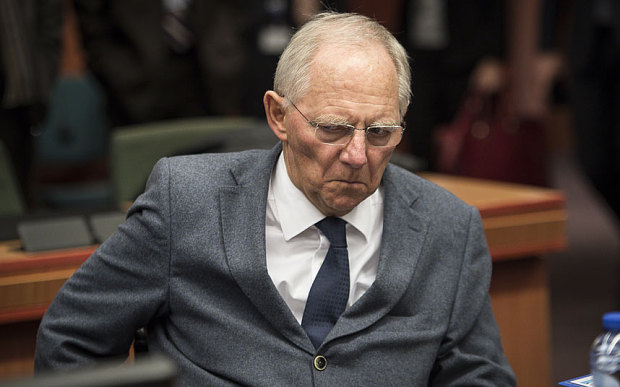 German Finance Minister Wolfgang Schaeuble says that discussion for Greek debt relief can only take place after 2018, despite his optimism that an agreement between Greece and eurozone finance ministers will be reached at the Eurogroup meeting scheduled for May 24.
In a new bout of “creative vagueness” over the interpretation of the results of the Eurogroup meeting on May 9, German Finance Minister’s Spokesman Martin Jaeger stated that “what was decided was that if, in 2018, there is a need, then we would be able to discuss debt relief.”
The statement follows Schaeuble’s own estimations on Tuesday night that there would be no need for a real haircut of Greek debt, adding that Greece is exempt from worrying about the debt burden for another ten years.
German daily newspaper Handelblatt held a function in honor of Schaeuble, where the German Finance Minister said that the issue would be examined again if the case of debt sustainability is not achieved in the medium term.
Along the same lines as Schaeuble, Jaeger feels confident that an agreement will be reached at the May 24 meeting, adding that the decisions do not bring anything new to the table but merely clarify the agreement reached at the European Council of leaders last summer. He explained: “What was decided was that, if in 2018, following the completion of the program and after the possible use of the contingency mechanism, there is still need to support funding of the Greek budget, then we can begin to discuss debt relief.”