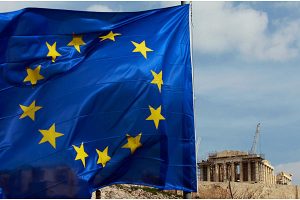 A draft proposal by the European Commission to break the deadlock on a new debt deal for Greece was leaked on Saturday, ahead of an emergency Eurogroup meeting of Eurozone finance ministers on Monday. The leaked report calls for “additional austerity steps” in case the Greek government fails to meet memorandum-mandated targets by 2018, reports Bloomberg.
In the report, the disbursement of a 5.2-billion-euro tranche benchmarked for Greece comes attached with a “contingency package” of measures to equal the degree by which the targets are missed, as much as 2 percent of the GDP. The report confirms a unified stand by creditors for an IMF demand that Athens draw up a “contingency package” of austerity reforms worth 3.6 billion euros atop a 5.4-billion-euro package already agreed upon.
A passage of the leaked report states:
“Αs a prior action, legislation will be adopted to ensure that a package of measures would be automatically implemented in the event a failure to meet the annual primary surplus targets in the programme: this is a means to provide additional assurance to reach the primary surplus target of 3.5 percent of GDP in 2018. This legislation will ensure that contingent assurance is automatic, objective and credible. Measures would be triggered automatically in the event of a negative difference between the target of the ESM programme for the year t-1 and the actual outcome, as objectively identified by ELSTAT in April on the basis of preliminary outturn data – validated by ESTAT in the context of the procedure of fiscal notification – modified by programme adjustors. On this basis, an adjustment will be undertaken equal to the negative deviation from the target, up to the size of 2 percent of GDP. To provide credible contingent assurance, the legislation will provide for the possibility to automatically reduce non-discretionary expenditure, as well as the corresponding claims and selected discretionary expenditure, and also to increase, whilst respecting the Greek Constitution, direct and indirect tax revenues. The fiscal adjustment measures provided for in the mechanism shall lead to a permanent correction in the gap. It will include a clause to cater for exceptional adverse developments that can be activated only in agreement with the European institutions”.