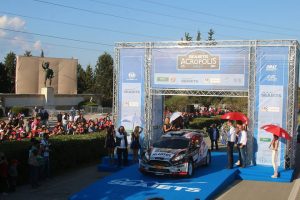 Spectators and local authorities gathered at the monument of ancient Spartan warrior king Leonidas at Thermopylae on Friday for the ceremonial start of the SEAJETS Acropolis Rally of Greece. A whopping 81 crews entered this year’s rally made all-the-more spectacular thanks to its return to the mountainous dirt track around Lamia, however, at the end of the first day of racing, Latvian Ralfs Sirmacis, aged 21, stole the show, at 4.4 seconds ahead of Russian Alexey Lukyanuk, reigning ERC points-leader.
At the end of the first day of racing, Latvian Ralfs Sirmacis, aged 21, was 4.4 seconds ahead of Russian Alexey Lukyanuk, as defending ERC points-leader. Last year’s Acropolis Rally champ Kajetan Kajetanowicz lost 14 minutes but then extended his lead to 26 seconds over Lukyanuk who suffered a puncture on special stage 2, however won special stage 3 with an 8.8-margin over Sirmacis, but lost that and more after a 10-second penalty for a jump start.
Greece’s Lambros Athanassoulasand Jaromir Tarabus were handed identical penalties in third and fourth place, 41.8 and 52.2 seconds behind respectively.
Known as the “rally of gods”, this year’s Acropolis Rally is especially exciting for enthusiasts thanks to the picturesque pine-setting and its return to Lamia, a challenging area due to its soft terrain and speedy strips. The last time the race had been held here was in 2005, when it had been declared the “Rally of the Year”.
Special stages for Saturday and Sunday 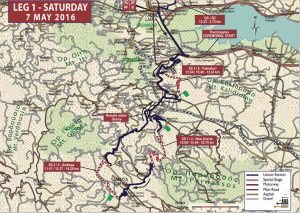 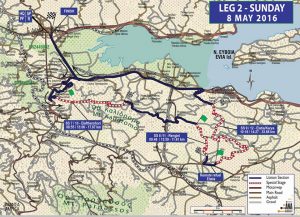 NOTE: SEAJETS has set up a contest for spectators recording the cars from their various vantage points as they whiz by. 10-second videos posted on social media with the hashtag #SeajetsAcropolisRally2016 have the chance to enter a drawing for winning tickets to any SEAJETS destination they choose.