GRNews
GreekReporter.comGreek NewsEconomyMoscovici: Greece Can Legislate for Contingency 'Mechanism' Rather than Detailed Measures

Moscovici: Greece Can Legislate for Contingency 'Mechanism' Rather than Detailed Measures 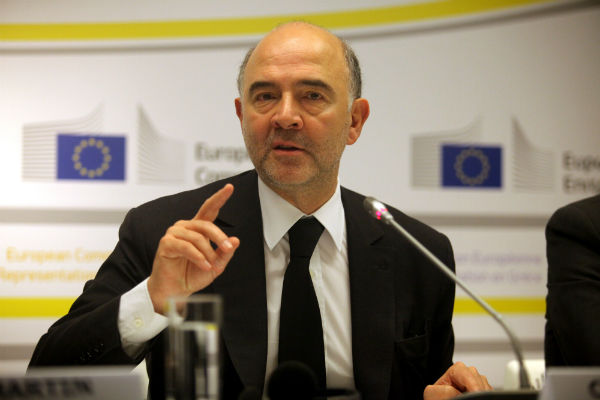 The European Commission does not think that Greece needs to vote for specific contingency measures but for a mechanism outlining how such measures might be taken, European Commissioner for Economic and Financial Affairs Pierre Moscovici told a group of reporters on Thursday.
“In our view, it is not necessary to have a precise and detailed set of measures but a mechanism that shows precisely how such measures will be taken if this is judged necessary,” Moscovici said. He noted that the proposals submitted by the Greek side so far were moving “in this direction” and “deserved to be looked at.”
The Commissioner said there was still work to be done in order for an agreement to be clinched but this “can and must be completed quickly.”
Referring to the International Monetary Fund (IMF), he said that the institutions representing Greece’s creditors must have a “common view” but this must not violate Greek law. “We want the IMF,” Moscovici pointed out, but the mechanism had to be “acceptable” to the Greek side and compatible with Greek laws.
The European institutions considered that the first package of measures, on which the two sides were very close to agree on, would be sufficient for Greece to achieve the primary surplus targets in 2018, he added.
The Commissioner said the progress made up until now was of the “best quality,” achieved in the “previous months and even years,” and it was misplaced to create an impression of crisis.
“We are 99 percent there on the first package. As for the contingency mechanism, which, in our view, is not really justified by data, but politically necessary, let’s work on that,” he said.
The Commissioner said that the deal should “on no account wait until July” and that no one would gain by a delay. He noted, however, that the Eurogroup was the right place for seeking a solution regarding an automatic mechanism and that it was up to Eurogroup President Jeroen Djisselbloem to decide when an emergency Eurogroup should be convened.
The important thing was to have conditions that allowed such a meeting to yield results, he added.
(source: ana-mpa)