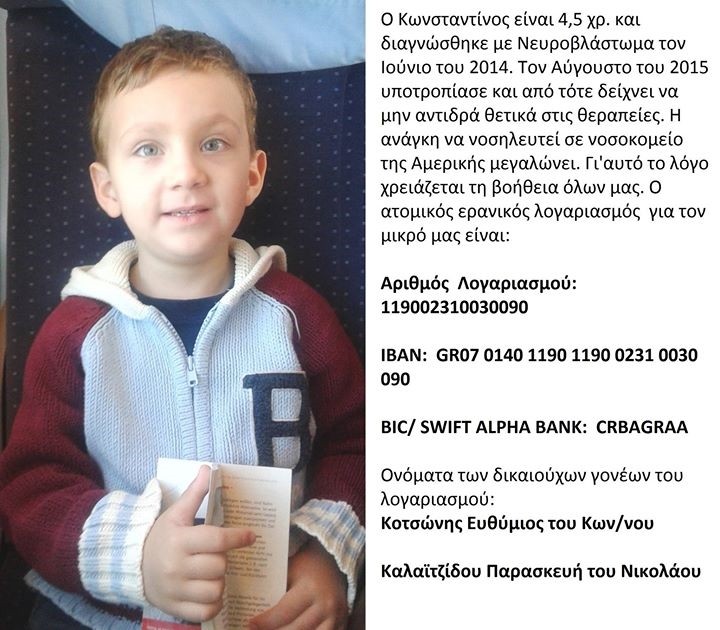 Four-year-old Konstantinos Kotsonis is suffering from a level-four neuroblastoma in the left suprarenal gland with metastasis to the bones and marrow. The diagnosis occurred in June 2014 by Ippokrateio Hospital in Thessaloniki and ever since the boy has been giving his battle with the disease, without losing, however, his cheer and child innocence.
Doctors at the Ippokrateio Hospital are making serious efforts for the boy’s treatment, however hospitals in both Germany and New York say there cannot be any additional help.
His only hope is to be treated at the University of Chicago Corner Children’s Hospital, which is aware of the child’s situation and can take up his case, as the hospital is known for the pediatric cases of such gravity.
However, the financial demand in the first phase is at $250,000 and the highest cost of the procedure can rise up to $1,500,000.
In the Alpha Bank account 119-00-2310030090 and with IBAN GR07 0140 1190 1190 0231 0030 090 (approved by the Ministry of Social Solidarity) people can donate money in order to assist.

Zagori is an awe-inspiring natural landscape with an incredibly well-preserved network of 46 villages and features national parks, rivers and waterfalls.
Animals

Greece is introducing new regulations for pet owners, sellers and stricter penalties for pet abuse in a new bill presented to Parliament on Thursday.
Greek Food