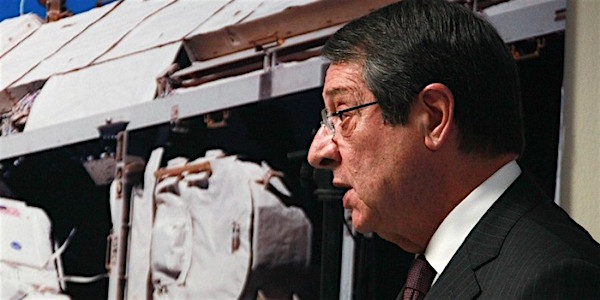 A live link with the European Organisation for Nuclear Research (CERN) was established on Monday evening in the presence of Cyprus President Nicos Anastasiades, in the framework of the inauguration of the island’s first Science Cafe.
During the live link, CERN Professors Paris Sphicas and Emmanuel Tsesmelis said that Cyprus` membership opens a new chapter in the cooperation of the island with CERN and praised the country`s contribution to the experiments carried out at CERN.
They noted that a team from the University of Cyprus, headed by Professor of Physics Panos Razis, contributed to the discovery of the Higgs boson, known as “God’s particle,” which led to the Nobel prize of Physics.
The two Professors expressed hope that CERN will attract many Cypriot physicists, engineers, technicians, teachers and students.
They also said that Cyprus can benefit from innovative technologies that are discovered through the various CERN experiments.
Associate Membership is the pre-stage to membership which allows the Republic of Cyprus to attend meetings of the CERN Council, Cypriot scientists to become members of CERN staff and Cypriot industry to bid for CERN contracts, thus opening up opportunities for industrial collaboration in areas of advanced technology.
In his speech, Anastasiades announced that International Astronomy Day, which is celebrated every year on May 14, will be celebrated for the first time this year at the Presidential Palace.
“It contributes to the expansion of our horizons as a society, but also because it is a good suggestion from a young person [referring to a 17-year-old’s suggestion to him to celebrate the day].
“There will be the opportunity to observe the sky through professional telescopes at the gardens of the Presidential Palace,” remarked Anastasiades.
In his speech, the President also referred to the prospect of constructing a sky observatory in the Troodos area.
He pointed out that this would have a positive impact on the development of the area and will contribute to education and tourist development.
It was stated that the sky observatory and planetarium will be part of a network of observatories supported by NASA and will serve educational purposes.
(Source: CNA)