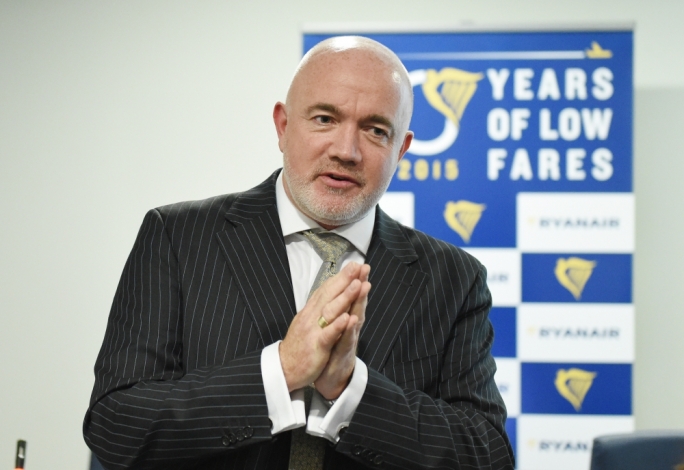 Ryan Air is cutting summer season flights to Greece two months early because the Greek government has not answered to his proposals, said the low cost airline Chief Commercial Officer David O’Brien.
O’Brien spoke to the Sunday edition of Greek newspaper To Vima saying the airline is forced to cut summer flights to Greece two months earlier because of new taxes to the tourism sector. At the same time, he said, the Greek government never answered to his proposals for bringing more tourists to Greece and called Deputy Tourism Minister Elena Kountoura, “Marie Antoinette.”
According to the airline executive, the decision was reached after the Greek government failed to respond to 25 letters in two years sent by Ryan Air with proposals to increase passenger traffic to Greece.
“We have sent 25 letters with proposals in the last two years, but we haven’t received any response, positive or negative,” O’Brien said in To Vima.
Specifically, the chief commercial officer of the Irish-based airline said that the proposals are referring to a possible increase of five million passengers to Greece within the next three years. He said that the tourism deputy minister replied that the issue “is not within her responsibilities” and at the same time she has no proposals of her own to increase tourism in Greece. O’Brien called her the “Marie Antoinette of Greece.”
The Ryan Air official also criticized a deputy minister interview on public television where she was talking about social tourism programs, a program for poor Greeks. O’Brien said that “the tourism strategy cannot be limited to the recycling of Greek taxpayers’ money.”
O’Brien said the flight cancellations will start with Kos, an island that has seen tourist bookings hit hard by massive refugee arrivals since last summer. “The Greek market is losing eight flights per day, two months earlier. Probably because the minister was busy with the (tourism) exhibition in Miami,” was O’Brien’s caustic remark.