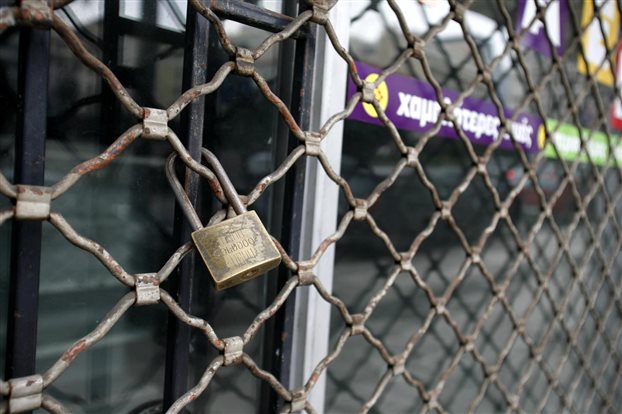 The rate of closed commercial property in Athens fell to 25.9% in March from 26.4% in September 2015, steadily falling after reaching a peak of 32.3% in September 2013, a survey by the National Confederation of Hellenic Commerce and Entrepreneurship (ESEE) said on Wednesday.
The survey showed that in contrast with Athens, the commercial market in Piraeus was hit harder with the percentage of closed businesses at 33.7% at the end of March, almost unchanged from 33.5% in March 2015, but off from its peak of 34.9% in September 2014.
ESEE president Vasilis Korkidis, commenting on the results of the survey said that business closures were showing signs of decline but noted that desertification zones were created in regional markets. “The economy cannot withstand a repeat of 2015 and the market cannot afford any new tax measures. We fear that the money to be drained from the market will bring back the danger of rising business closures. The epidemic of business closures, that shook Greek commerce may have been contained, but we are not out of the woods yet…” Korkidis said.
Source: ANA MPA