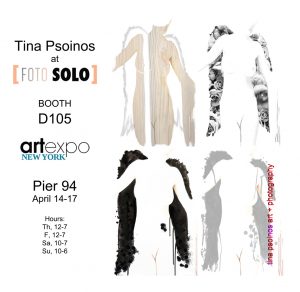 New York’s Art Expo, arguably the city’s and possibly the Nation’s most prestigious Art fair is in full swing this week.  From April 14-17 New York will be celebrating the arts and its ambassadors.

Amongst the vast sea of talent that participates in this expansive 4 day event, Tina Psoinos a New York City-based, award-winning, Greek-American artist, photographer and designer will be presenting her new works “Imagine Angels.”

We caught up with Ms. Psoinos in her midtown studio: “Guardian Angels are everywhere and they come in different shapes and forms. I like bringing them to light.  I use photography, acrylic paints and found objects on a variety of surfaces and the first time I experimented with this concept was in 2008.  Angel #A1 was first shown at a benefit for SVQF in 2010 in NY but then there was a period when it just hang in my studio and other concepts and work took precedent. That changed late last year when I started to develop my Angels with a first showing at 601 Artspace Gallery in Chelsea this February.”

“I realized that the more I work on them the more possibilities I see as people from all walks of life are drawn to them for different reasons.  It pleases me to be able to create meaning thru art for so many.  Others find them spiritual, as others find them plainly aesthetically pleasing.”

All the current works of “Imagine Angels” are experimenting with the female form – in subtle variations of exposure and singular details with various mixed media.  There is no example of the male form yet, but we feel it’s in the near future of Ms. Psoinos’s work.  She feels this is project investigating Art and familiarity in cultural and mythical references within today’s modern society.

Ms. Psoinos works can be viewed at www.tinapsoinos.com and she can be reached at [email protected]

On April 20-23 Ms. Psoinos, together with her partner, Paris Kostopoulos of Paris K Design will participate in DOAD2216 Design on a Dime at the Metropolitan Pavilion in New York creating a vignette featuring furniture, rugs, lighting and accessories by Natuzzi Italia and the triptych, Jogjakarta Black, from her Layers Desigual series. All proceeds will benefit Housing Works.

Curated by Beth Saunders of the Metropolitan Museum of Art, who selected “White on White #1,” a mixed media work by Ms. Psoinos

Ms. Psoinos and Mr. Kostopoulos of Paris K Design, will partner with Urban Green Furniture to create a Design vignette in the Hamptons showcasing her custom artwork.

Ms. Psoinos work was selected to participate amongst the luminary artists of our times in the prestigious Berlin Biennial.

Past 2016 Exhibits and Awards

The Greek Goddess Gaia and Her Connection to Earth Day