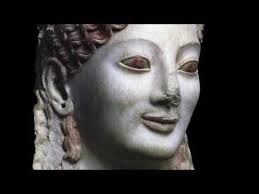 One of the Athens Acropolis’ finest and best-preserved votive korai — the archaic statues depicting young women — will be presented outside Greece for the first time on Friday, when it is put on display in the Roman Courtyard of the State Hermitage Museum in St. Petersburg. The statue, which leaves Greece for the first time, is traveling to Russia as one of the cultural exchanges organized for the Year of Greece and Russia 2016.
The exhibition will be inaugurated on the Greek side by Greece’s Culture Minister Aristidis Baltas and on the Russian side by St. Petersburg Governor Georgy Poltavchenko and Russian Culture Minister Vladimir Medinsky.
A culture ministry announcement said that the two countries are planning a series of such initiatives throughout the year, in order to further cement the bonds of friendship between the two countries. Such initiatives will also include the organization of exhibitions, including archaeological exhibitions, that will give the Greek and Russian people an opportunity to become acquainted with important aspects of each others culture.
These exhibitions will begin with two separate “advance” presentations, the first of which was the loan of Greco-Scythian gold objects from the State Hermitage Museum to the Acropolis Museum on March 11, where they will remain until October 2, and the second being the Kore statue.
The kore loaned to the Hermitage Museum was discovered in 1886 northwest of the Erechtheion. It is dressed in richly colored clothing and jewellery and is lifting her long chiton as she walks. The hair, eyes, clothes and jewellery all retain traces of the original colored pigments decorating the marble statue.
(Source: ANA MPA)