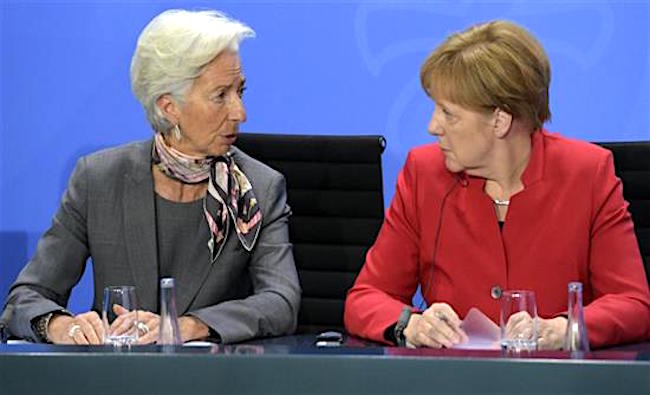 German Chancellor Angela Merkel and IMF Managing Director Christine Lagarde agreed that the Fund will participate in monitoring Greece’s bailout program but disagreed on a debt haircut.
The two women met in Berlin on Tuesday during a conference of global economic leaders. Merkel said that a debt haircut for Greece was not possible as long as the country remains in the euro zone, adding that Germany wanted a quick conclusion of a bailout review, according to a Deutsche Welle report.
On her part, Lagarde said that the International Monetary Fund is reluctant to actively participate in Greece’s third bailout without Europe promising debt relief for Greece.
Germany said that the issue of debt relief cannot be discussed before Athens shows compliance to the bailout program terms. So far, Greece has not fulfilled its obligations.
“It is not a demand of the German government to have no haircut but rather in our opinion this is legally not possible in the euro zone… The German position is that the IMF takes part in an agreement … We want a quick conclusion of these talks,” Merkel told reporters.
On her part, Lagarde said: “We are engaged, we are working together, we had a really good discussion earlier on today with the Chancellor, and we are determined to continue to help.”
Lagarde reiterated IMF’s position that Greece needs “long-term sustainability, and debt sustainability for Greece is going to matter for private sector investors.”
“We are clearly not where we want to be and particularly where Greece should be in order to be stable, in order to be prosperous, in order to respond to the Greek population needs,” she added, according to the DW report.

Ten Ancient Sites You Must See While in Athens