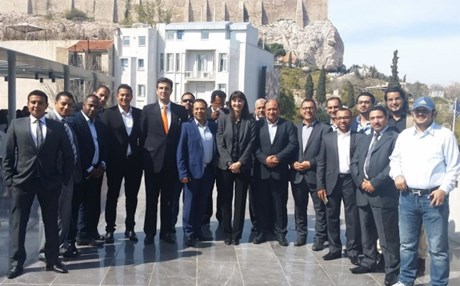 Sixteen representatives of leading travel agencies from Saudi Arabia which operate in Riad, visited Athens and met with the Deputy Minister of Tourism, Elena Kountoura, acting within the framework of promoting Greek Tourism and attracting visitors from the Saudi Arabian market.
This initiative constitutes part of a whole action program, focusing on the Saudi Arabian market, which is considered to be a rapidly growing touristic market, with a strong interest in Greece. The representatives — who enthusiastically stated that their experience was exciting —  had the opportunity to enjoy a tour at the sights of Athens and the broader area of Attica, and visit Nafplio, Epidaurus and Aegina. They also expressed their optimism about the remarkable prospects of touristic collaboration between the two countries.
Elena Kountoura thanked them for their visit and elaborated on the action plan which aims at the promotion of the Greek tourism in Saudi Arabia, as well as referred to the 2nd Greek Tourism Workshop which will take place in Riad the coming week. The ultimate goal is the reinforcement of the bilateral collaboration of the Greek and Saudi Arabian touristic markets. The Ministry and the Greek Organization of Tourism are going to be represented by Mr. Dimitris Trifonopoulos, the general secretary of GOT.