Wikileaks: IMF Threatens to Leave Troika Ahead of Greek 'Disaster' 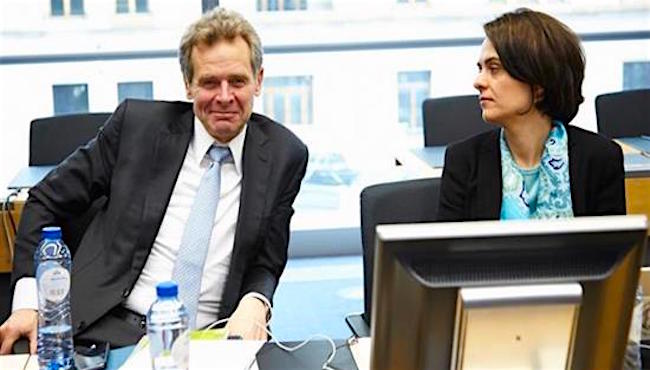 Wikileaks has revealed a conversation between the two top IMF officials in charge of the Greek debt crisis, Poul Thomsen, head of the IMF’s European department, and Delia Velculescu, IMF mission chief for Greece. The details of the conversation, which were obtained from the organization about a month ago, show how the IMF will “push” EU and Greece to succumb to its demands. Here’s the full report as was published by Wikileaks:
Today, 2nd April 2016, WikiLeaks publishes the records of a 19 March 2016 teleconference between the top two IMF officials in charge of managing the Greek debt crisis – Poul Thomsen, the head of the IMF’s European Department, and Delia Velkouleskou, the IMF Mission Chief for Greece.  The IMF anticipates a possible Greek default co-inciding with the United Kingdom’s referendum on whether it should leave the European Union (‘Brexit’).
“This is going to be a disaster” remarks Velkouleskou in the meeting.
According to the internal discussion, the IMF is planning to tell Germany that it will abandon the Troika (composed of the IMF, European Commission and the European Central Bank) if the IMF and the Commission fail to reach an agreement on Greek debt relief.
Thomsen: “Look you, Mrs. Merkel, you face a question: you have to think about what is more costly, to go ahead without the IMF–would the Bundestag say ‘The IMF is not on board?’, or [to] pick the debt relief that we think that Greece needs in order to keep us on board?”
Remaining in the Troika seems an increasingly hard sell internally for the IMF, because non-European IMF creditor countries view the IMF’s position on Greece as a violation of its policies elsewhere of not making loans to countries with unsustainable debts.
In August the IMF announced it would not participate in last year’s €86 billion Greek bailout, which was covered by EU member states. IMF Chief Christine Lagarde stated at the time that the IMF’s future participation was contingent on Greece receiving “significant debt relief” from creditors. Lagarde announced that a team would be sent to Greece, headed by Velkouleskou.
Thomsen said internally that the threat of an imminent financial catstrophe is needed to force the other players into a “decision point”. For Germany, on debt relief, and In the case of Greece, to accept the IMF’s austerity “measures,” — including raising taxes and cutting Greek pensions and working conditions. However the UK “Brexit” referendum in late June will paralyse European decision making at the critical moment.
“I am not going accept a package of small measures. I am not…” said Thomsen. “What is going to bring it all to a decision point? In the past there has been only one time when the decision has been made and then that was when [the Greeks] were about to run out of money seriously and to default. […] And possibly this is what is going to happen again. In that case, it drags on until July, and clearly the Europeans are not going to have any discussions for a month before the Brexits…”
Last year Greek Finance Minister Tsakalotos accused the IMF of imposing “draconian measures,” including on pension reform. While Velkouleskou concedes in the meeting that “What is interesting though is that [Greece] did give in… they did give a little bit on both the income tax reform and on the…. both on the tax credit and the supplementary pensions.”
But Thomsen’s view is that the Greeks “are not even getting close [to coming] around to accept[ing] our views.”  Velkouleskou argues that “if [the Greek government] get pressured enough, they would… But they don’t have any incentive and they know that the Commission is willing to compromise, so that is the problem.”
Velkouleskou: “We went into this negotiation with the wrong strategy, because we negotiated with the Commission a minimal position and we cannot go further [whereas] the Commission is just starting from this one and is willing to go much further. So, that is the problem. We didn’t negotiate with the Commission and then put to the Greeks something much worse, we put to the Greeks the minimum that we were willing to consider and now the Greeks are saying [that] we are not negotiating.”
While the Commission insists on a Primary Government Budget Surplus (total tax minus all government expenditure excluding debt repayments) of 3.5%; the IMF thinks that this target should be set at 1.5% of GDP. As Thomsen puts it, “if [Greece] come around to give us 2.5% [of GDP in tax hikes and pension-wage-benefits cuts]… we should be fully behind them.” — meaning that the IMF would, in exchange for this fresh austerity package, support the reduction of the Primary Surplus Target imposed upon them from the 3.5% that the European Commission insists on to 1.5%.
These targets are described as “very crucial” to the IMF. The IMF officials ask Thomsen “to reinforce the message about the agreement on the 2.5%, because that is not permeating and it is not sinking very well with the Commission.”
At one point, Velkouleskou refers to an unusual solution: to split the problem into two programs with two different targets: “The question is whether [the Europeans] could accept the medium term targets of the Commission, for the purposes of the program, and our targets for the purposes of debt relief.” Thomsen further explains that “They essentially need to agree to make our targets the baseline and then have something in that they hope that will overperform. But if they don’t, they will still disburse.”
The EWG [Euro Working Group] needs to “take a stand on whether they believe our projections or the Commission’s projections.” The IMF’s growth projections are the exact opposite of the Commission’s. The Commission projects a GDP growth of 0.5%, and the IMF a GDP decline of 0.5% (even if Greece accepts all the measures imposed by the IMF).

Government Sources: The government will not allow games at Greece’s expense
The Greek government appears annoyed after the leaked dialogue between Poul Thomsen and Delia Velculescu. Government sources mention that “the government is not willing to allow any games at the country’s expense.”
“The Greek government is asking for explanations whether the pursuit of creating conditions for bankruptcy in Greece before Britain’s referendum is the IMF’s main view,” highlighted the government’s spokesperson Olga Gerovassili, who is participating in a meeting with PM Alexis Tsipras, MPs and colleagues at Maximos Mansion.
IMF’s Comments on the matter
Just before 5 pm Greece time, the first reaction of the IMF regarding the Wikileaks revelation of the Tomsen – Velculescu conversation was:
“We do not comment on leaks or alleged references for internal conversations,” said the representative of the IMF in Washington.
“We have made clear that we believe that a viable solution is needed regarding the financial challenges that Greece is facing – a solution that will put Greece in the path of viable development which is supported by a package of reforms in collaboration with the reduction of Greece’s debt by the European associates,” the same source added.