Doctors of the World Leave Chios Hotspot After Refugee Fight 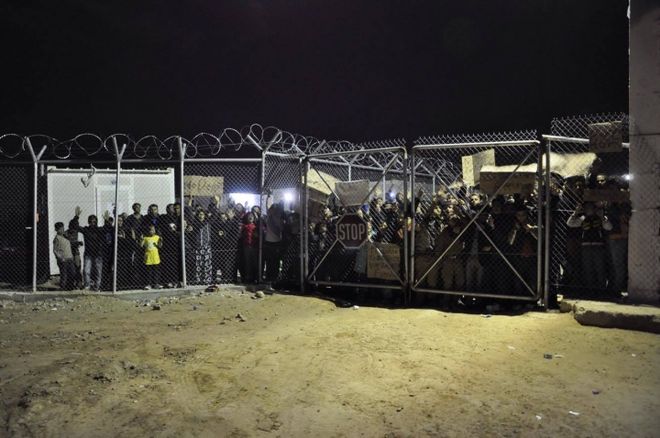 Two refugees were stabbed and three more suffered serious injuries after a violent fight broke out on Thursday night at the Chios refugee registration center, forcing the Doctors of the World to leave the island.
This was the third serious violent brawl between migrants that broke out within 48 hours, after the incidents at Idomeni and Piraeus Port that left several people injured.
According to politischios.gr website, the Chios hotspot became yet another battlefield for refugees and migrants. Groups of different ethnic backgrounds clashed for unknown reasons resulting in the stabbing of two people who were transferred to hospital. Others sustained serious head and leg injuries.
Police attempted to disperse the angry mob by throwing stun grenades. According to local police, they have repeatedly requested the dispatch of two more riot police units to the island for help. A riot police unit is expected on the island on Friday.
The angry migrants trashed the infrastructure at the reception center and literally destroyed the Doctors of the World facility. The volunteer organization is now forced to leave the island after damages of the Doctors of the World clinic are estimated at 30,000 euros.
The Chios registration and accommodation center has a capacity of 1,200. At the moment, about 1,500 refugees and migrants are detained at the center. More than 200 arrived at the island on Thursday and will be registered on Friday to be transferred later at the Souda camp in Chios city.
Local residents have planned a protest at the island’s police station on Friday morning.